Explore More
Close
Blog post
Economics and Globalization
Sanctions Should Impose Costs Where They Are Due
By Maxim Trudolyubov on December 2, 2020
Share on FacebookShare on TwitterShare via Email
SharePrint
Blog post

We Are Right, You Are Wrong: Russia’s Response to Brexit

Brexit will have some good consequences and some bad consequences, Russian president Vladimir Putin said in the immediate aftermath of the British vote. The president sounded restrained and impartial, leaving to lesser players the chance to cheer in public.

“The European Union was like a beacon of light: if you were not in the EU it meant something was wrong with you,” Konstantin Kosachev, head of the International Relations Committee of the Federation Council said during a Channel One talk-show on Tuesday. “But what can possibly be wrong with Great Britain?” Kosachev posed the rhetorical question to imply that the U.K., integrated in every institution of the West, was an unlikely candidate to undermine the European Union.

“Nothing is wrong with us, something is wrong with you in the West” – this has been the main tune sung by Russia in reaction to Brexit. The single most important consequence of the vote, from Russia’s perspective, is the effective ban on any future expansion of the European Union. It would be politically impossible for the EU to expand further East when it is crumbling in the West.

Turkish president Recep Tayyip Erdogan’s decision to apologize to Russia for the downing of a Russian fighter-bomber is seen as the first fruit of a larger harvest to come. The British decision to leave the EU is seen as a major blow to the West as a cohesive political player; the beginning of the end of a unified Europe. Many have said that the EU, the West’s largest trade bloc and a political entity in itself, has been fatally wounded and U.S. influence in Europe will now diminish. All of these developments would be highly welcome from Moscow’s vantage point.

The single most important consequence of the vote, from Russia’s perspective, is the effective ban on any future expansion of the European Union. It would be politically impossible for the EU to expand further East when it is crumbling in the West.

While the official Russian reaction to the British decision to leave the European Union was subdued, anchors and guests of state-run media let loose a barrage of gleeful comments. Many joked that Britain was leaving the European Union to join the Eurasian Union, a loose economic bloc lead by Russia. Some said it with complete sincerity: “The most important long-term consequence of Brexit is that it will take Europe away from the anglo-saxons, mainly from the U.S., and as soon as that happens a united Eurasia will appear on the horizon, in about 10 years,” Boris Titov, Russia’s business ombudsman, wrote on Facebook soon after the news of the British popular decision.

Dmitry Kiselyov, arguably the most venomous pro-Kremlin journalist, led his weekly program on the Russia One channel with the Brexit theme and a sign reading, “The Breakup of the European Union” alight behind him. “This time the Britons voted for a divorce with the EU but we clearly see their desire to be generally independent,” said Kiselyov, who also serves as director of the state-owned international news agency Rossiya Segodnya. Transatlantic forces have lost the fight. The British people “resisted a direct order from Barack Obama to stay in the EU,” Kiselyov said. “It is a major failure of governability.”

Almost every analyst in Russia, regardless of political conviction, noted that with Britain out of the decision making process, European politicians would have harder time keeping the sanctions regime in place. “I would expect some gains for Russia from the sanctions war standpoint, but these won’t materialize until next year,” said Alexei Gromyko,  director of the Institute of Europe of the Russian Academy of Sciences and head of European programs of the Russian World foundation.

Brexit’s immediate economic effect on Russia is unclear. It may affect the exchange rate because of increased volatility in commodities markets but only to a limited extent. “Russia has suffered a chain of economic shocks in 2014 to 2016 that gave our a country an immunity shot of sorts,” the Russian Finance Minister Anton Siluanov said in an interview, referring to the combined shock of the oil plunge and the post-Crimea Western sanctions.

The crisis caused by the British vote may be analyzed as a case of national politics interfering with supranational designs. It was not an “order” from Obama that the British resisted. They seemed to resist their own and other European politicians’ habit of emphasizing European structures and European values over national ones. Brexit also seems to have sent European elites a message about depressed small towns and the troubles of national healthcare systems on the one hand, and multi-million dollar City bonuses and endless Davos-style chatter on the other. That said, it is hard to believe that Britain could solve its problems by leaving the EU.

Brexit, being a welcome surprise for Russia’s political leadership, also reminds the Kremlin of a hidden challenge. If national politics trump supranational agendas everywhere, Russia is in trouble.

During the first two decades after the end of the Cold War, everyone was happy to embrace the newly acquired openness and mobility. Those who won because of the intensified exchange of capital, resources and ideas attracted everyone’s attention. Highly mobile, cosmopolitan elites and foreign-language speaking professionals were the heroes of the time. But the general populations of each individual country are neither particularly mobile, nor particularly multi-lingual, and are preoccupied by local rather than global agendas. The disconnect between the globalized elites and the local, regular folk exists everywhere. It is only now attracting significant notice due to the  massive amount of attention the British referendum generated.

Brexit, being a welcome surprise for Russia’s political leadership, also reminds the Kremlin of a hidden challenge. If national politics trump supranational agendas everywhere, Russia is in trouble. For the past decade, the Kremlin has been making sure the Russian population subsists on news about Russia’s engagement with its international enemies, the likes of Britain and the U.S. Just like Britain, Russia has a national healthcare system and numerous depressed small towns. In fact, there are more of them in Russia than in Great Britain. If the Russian public wakes up and decides to prioritize the national agenda over the international one, the consequences for the Kremlin would be much tougher than the consequences of Brexit are for Whitehall. But as of today, this prospect looks as distant as the prospect of Britain joining the Eurasian union. Most Russians identify with the Kremlin and are convinced that they are right and the West is wrong. 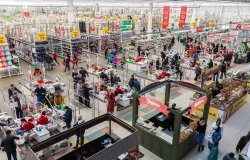 Blog post
Economics and Globalization
Sanctions Should Impose Costs Where They Are Due
By Maxim Trudolyubov on December 2, 2020