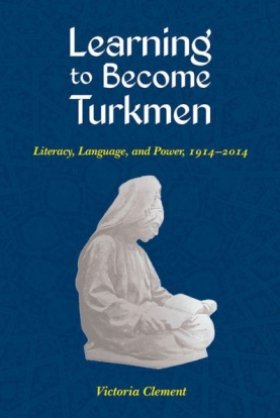 Learning to Become Turkmen examines the waysin which the iconographyof everyday life--in dramatically different alphabets, multiple languages, and shifting education policies--reflects the evolution of Turkmen society in Central Asia over the past century. As Victoria Clement shows, the formal structures of the Russian imperial state did not affect Turkmen cultural formations nearly as much as Rusian language and Cyrillic script. Their departure was also as transformative to Turkmen politics and society as their arrival.

Complemented by extensive fieldwork, Learning to Become Turkmen is the first book in a Western language to draw on Turkmen archives, as it explores how Eurasia has been shaped historically. Revealing particular ways that Central Aians relate to the rest of the world, this study traces how Turkmen consciously used language and pedagogy to position themselves within global communities such as the Russian/Soviet Empire, the Turkic cultural continuum, and the greater Muslim world.

"Learning to Become Turkmen is unique in several respects. There are very few books in English on the history of Turkmens and Turkmenistan, and no other book-length treatment of its language and culture. Clement does an excellent job of broadening the analysis to make it relevant to scholars beyond the handful of 'Turkmenologists' in Western academia."