Portraying the Soul of a People: African Americans Confront Wilson’s Legacy From the Washington Stage 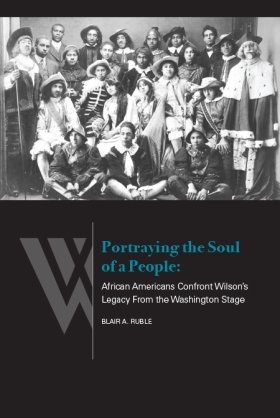 Portraying the Soul of a People: African Americans Confront Wilson’s Legacy From the Washington Stage

In 1916, following the viewing of D. W. Griffith's The Birth of the Nation by President Wilson at the White House, a half dozen prominent Washington writers convened under the auspices of the NAACP to respond.  The group sponsored a production of Angelina Weld Grimke' anti-lynching play Rachel to counter Griffith's scurrilous portrayal of African Americans.  Members, which included several prominent intellectuals who later would appear on US Postal stamps, argued about the most appropriate response to Griffith and Wilson as well over how to best portray Blacks on stage. Howard professors T. Montgomery Gregory and Alain Locke returned to campus and launched the Howard Players as a first step toward the establishment of a National Negro Theatre.  This volume traces their endeavors as well as subsequent efforts at Howard University and in Washington to present African Americans on stage with dignity and respect.

Blog post
Society and Culture
Reifying Loss and Healing: Crimea and Crimean Tatars in Ukrainian Art after 2014
By Ewa Sulek on October 2, 2020