On the Brink: Trump, Kim, and the Threat of Nuclear War 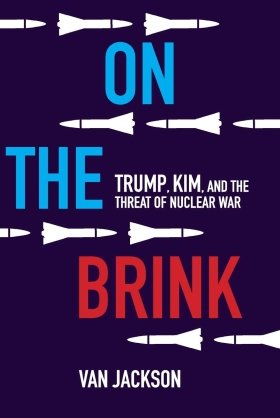 In 2017, the world watched as President Donald Trump and North Korean leader Kim Jong Un traded personal insults and escalating threats of nuclear war amid unprecedented shows of military force. Former Pentagon insider and Korean security expert Van Jackson traces the origins of the first American nuclear crisis in the post-Cold War era, and explains the fragile, highly unpredictable way that it ended. Jackson analyzes the US response to North Korea's increasing nuclear threat in the context of Trump's aggressive rhetoric, prior US policy failures, the geopolitics of East Asia, North Korean strategic culture and the acceleration of its nuclear program. Jackson argues that the Trump administration's policy of 'maximum pressure' brought the world much closer to inadvertent nuclear war than many realize - and charts a course for the prevention of future conflicts.

"Van Jackson has written an insightful, detailed, and frightening history of the Korean nuclear crisis.  It is like a thriller with the sequel yet to be written.  Readers will understand both how deeply dangerous the past few years have been and how many nuclear dangers remain lurking just over the horizon." --Scott D. Sagan, author of The Limits of Safety

"On the Brink is a smart, readable explanation of the nuclear crisis of 2017--one that explains how Washington and Pyongyang found themselves on a collision course and one that offers sage advice about managing the risk of nuclear war in the future." --Jeffrey Lewis, Publisher of ArmsControlWonk.com and author of The 2020 Commission Report on the North Korean Nuclear Attacks against the United States: A Speculative Novel

"On the Brink is a timely, serious, and substantive treatment of a perennial national security problem for the United States. Jackson successfully weaves theory, history, and policy into a book that makes every reader smarter on North Korea. Recommended reading not just for experts, but for general audiences."  --Victor Cha, D.S. Song-KF Professor, Georgetown University and former National Security Council director for Japan, Korea, Australia, and Pacific Island affairs

"With a deep sense of history, Van Jackson has given us a vital record of a near-disaster. Vigorous, wise, and highly informed, On the Brink decodes the theatrics and leaves the lessons inescapably clear for future generations."  --Evan Osnos, author of The Age of Ambition

"A history that's as illuminating for the policymaker as it is for the informed citizen. If you want to know how close the world came to nuclear war in 2017--and how to avoid it in the future--this is a must-read."--Admiral James Stavridis, USN, Dean of The Fletcher School of Law and Diplomacy at Tufts University, Former NATO Supreme Allied Commander Europe

"Van Jackson provides an excellent scholar-practitioner's guide to the history of US-North Korean misunderstanding and mutual hostility. He provides a clarion call regarding the scope and magnitude of the danger that surrounded the Trump administration's efforts to grapple for the first time with vulnerability to North Korean nuclear capabilities." --Scott Snyder, author of South Korea at the Crossroads

"A terrific and terrifying story of bumbling into a nuclear crisis because of unrealistic goals and a failure to understand North Korea. Van Jackson, a fine scholar of Korean affairs, has written a remarkable history that anyone wishing to avoid nuclear war-or make sense of North Korea-should read." --Robert Edwin Kelly, Pusan National University