In the Face of the Facts: Moral Inquiry in American Scholarship 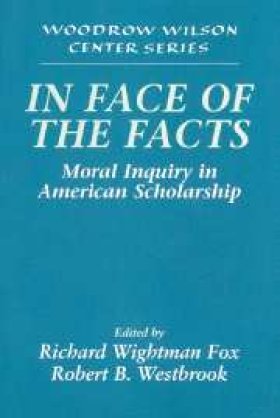 Recently there has been a renewed interest in moral inquiry among American scholars in a variety of disciplines. This collection of accessible essays affords a view of the current state of moral inquiry in the American academy, and it offers fresh departures for ethically informed, interdisciplinary scholarship. Seeking neither to reduce values to facts nor facts to values, these essays aim to foster discussion about inquiry and moral judgment, and demonstrate that moral inquiry need not be either dispassionate and value-free or moralistic and preachy. In gathering this volume, Fox and Westbrook sought to explore what amounts to a new moral inquiry without moralizing across a wide range of subjects investigated and taught in the modern university.

These chapters were presented and commented on at a 1995 conference sponsored by the Wilson Center’s Division of Historical, Cultural and Literary Studies, and have been subsequently revised for publication.

3. Moral Inquiry Within the Bounds of Politics: A Question of Victimhood

5. Fighting (over) Words: Speech, Power, and the Moral Imagination in American History

6. ‘Of the Standard of Moral Taste’: Literary Criticism as Moral Inquiry

8. Snakes Alive: Resituating the Moral in the Study of Religion

9. Social Science and the Noral Revival: Dilemmas and Difficulties

10. Religion, Morality, and Other Unmentionables: The Revival of Moral Discourse in the Law

“…each paper is excellent, equally insightful about ‘moral inquiry’ in general and in the particular discipline discussed.”—The Virginia Quarterly Review