The Other Population Crisis: What Governments Can Do about Falling Birth Rates 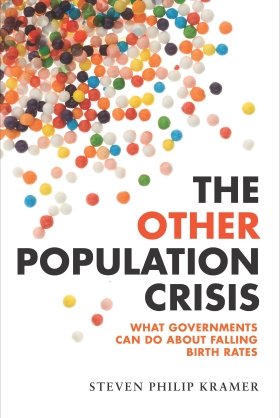 In many developed countries, population decline poses economic and social strains and may even threaten national security. Through historical-political case studies of Sweden, France, Italy, Japan, and Singapore, The Other Population Crisis explores the motivations, politics, programming, and consequences of national efforts to promote births. Steven Philip Kramer finds a significant government role in stopping declines in birth rates.

Sweden and France’s pronatalist programs, which have succeeded, share a setof characteristics that make it easier for women to balance work and family life. In contrast, programs in Italy, Japan, and Singapore, which have failed so far, have not devoted sufficient resources consistently enough to make a difference and do not support gender equality and women’s work-family balance. Kramer’s assessment furthermore discusses the role that successful population policies have in promoting national security, economic competitiveness, gender equality, and social welfare in the developed and developing world.

Steven Philip Kramer is professor of grand strategy at the Dwight D. Eisenhower School for National Security and Resource Strategy, National Defense University, in Washington, D.C. He was a public policy scholar at the Woodrow Wilson Center from 2010 to 2011.

2. Demography in France: From National Security to Family-Work Reconciliation

4. Japan: The Politics of Position Taking

5. Singapore: The Failure of Activism

“Across the globe, birth rates are falling. Kramer examines differences in how five countries perceive and respond to such population crises, and what policy lessons might be drawn from their experience. This astute comparison will be of interest to activists, policymakers, and scholars alike.”—Sonya Michel, University of Maryland

The Other Population Crisis was discussed in Elizabeth Kolbert's review article "Head Count" in The New Yorker (October 21, 2013).