The Sino-Russian Challenge to the World Order: National Identities, Bilateral Relations, and East versus West in the 2010s 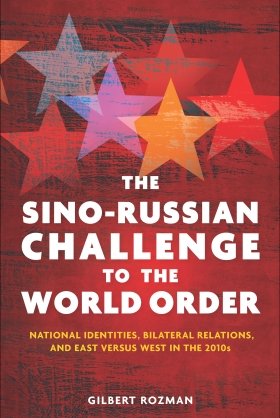 The Sino-Russian Challenge to the World Order is the third volume in a trilogy on national identity. The first two volumes, edited by Gilbert Rozman, concerned the identities of three East Asian countries: China, Japan, and South Korea. The contributors first analyzed how these countries’ national identities suffered through their relation to modernization, and then examined how the national identity of each differed from the other two and how those differences were shaped by the relation of each country to the United States.

In this third volume, Rozman examines Russia as well as China. The Sino-Russian Challenge to the World Order argues that China and Russia’s national identities are much closer to each other than usually thought, and are growing even closer. The closeness of their identities comes neither from their prerevolutionary pasts nor from today’s practical politics, but rather from habits carried over from their communist periods. Even though the contribution of ideology to identity has been diminished for both countries since 1990, ideology is only one dimension of identity among six. The other dimensions of identity under communism bring the two countries closer, and even the ideological identity gap is smaller than it first appears. Furthermore, the national identity of these two countries must be reconstructed alongside the dismantling of traditional communism in order to achieve successful reform.

Gilbert Rozman is Musgrave Professor of Sociology at Princeton University. His research examines comparisons of national identities and their impact on bilateral relations. His publications include Strategic Thinking about the Korean Nuclear Crisis: Four Countries Caught between North Korea and the United States (2011), and U.S. Leadership, History, and Bilateral Relations in Northeast Asia (2011). His edited volumes include the two predecessors to the present volume—East Asian National Identities: Common Roots and Chinese Exceptionalism and National Identities and Bilateral Relations: Widening Gaps in East Asia and Chinese Demonization of the United States (Woodrow Wilson Center Press and Stanford University Press, 2012 and 2013). Rozman was a fellow at the Wilson Center in 2010–11.

“Rozman’s account is a substantial one, and it is of considerable historical depth on the pre-communist eras through to the 2010s.… [A] useful conclusion to a series which highlights the complex and changing nature of national identity and its impact on international relations.”—Tim Summers, International Affairs

“A very useful contribution to the field.” —Shiping Hua, University of Louisville