Skip to main content
Support
Show
Streaming
Responding to the Ukrainian Refugee Plight: The EU and US Perspectives
Watch Now
Play Video
Explore More
Close
The Hill
U.S. Politics
An Infrastructure Bank Could be the Issue That Unites a Divided Congress
Share on FacebookShare on TwitterShare via Email
Share
Share
Email
Book

Trafficking Data: How China Is Winning the Battle for Digital Sovereignty 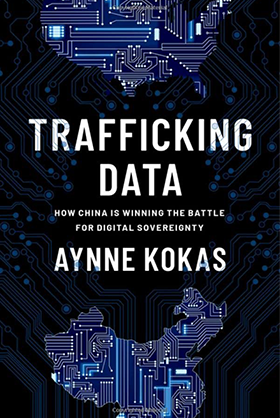 Trafficking Data: How China Is Winning the Battle for Digital Sovereignty

From TikTok and Fortnite to Grindr and Facebook, Aynne Kokas delivers an urgent look into the technology firms that gather our data, and how the Chinese government is capitalizing on this data flow for political gain.

On August 6, 2020, the Trump Administration issued a ban on TikTok in the United States, requiring that the owner, Beijing-based Bytedance, sell the company to American investors or shut it down. Legions of TikTokers were devastated at the possible loss of their beloved platform, and for what: a political grudge with China? American suitors like Walmart and Oracle tried to make a deal with Bytedance to keep the platform operating in the US. But then something curious happened. The Chinese government refused to let Bytedance sell TikTok on national security grounds. As it turns out, the pandemic era platform for dance challenges is a Chinese government asset.
As digital technologies and social media have evolved into organizing forces for the way in which we conduct our work and social lives, the business logic that undergirds these digital platforms has become clear: we are their product. We give these businesses information about everything--from where we live and work to what we like to do for entertainment, what we consume, where we travel, what we think politically, and with whom we are friends and acquaintances. We do this willingly, but often without a full understanding of how this information is stored or used, or what happens to it when it crosses international boundaries. As Aynne Kokas argues, both corporations and governments "traffic" much of this data without our consent--and sometimes illegally--for political and financial gain.

In Trafficking Data, Aynne Kokas looks at how technology firms in the two largest economies in the world, the United States and China, have exploited government policy (and the lack thereof) to gather information on citizens, putting US national security at risk. Kokas argues that US government leadership failures, Silicon Valley's disruption fetish, and Wall Street's addiction to growth have fuelled China's technological goldrush. In turn, American complacency yields an unprecedented opportunity for Chinese firms to gather data in the United States and quietly send it back to China, and by extension, to the Chinese government. Drawing on years of fieldwork in the US and China and a large trove of corporate and policy documents, Trafficking Data explains how China is fast becoming the global leader in internet governance and policy, and thus of the data that defines our public and private lives.

"In Trafficking Data, Kokas walks us through the most recent trade-offs, Faustian bargains, and back door dealings that Silicon Valley firms use to do business in the People's Republic of China. Only by empowering consumers and holding technology affirms accountable, Kokas argues, can we stifle the international trafficking of our data." -- Philip N. Howard, Director, University of Oxford's Programme on Democracy and Technology

"China's digital platforms are well known, but Aynne Kokas is the first to study systematically the interactions between the digital products of US techno-liberalism and China's state-directed social order. Trafficking Data breaks new ground in the study of geopolitics and national sovereignty. Given our dependence on platforms and systems fuelled by Chinese AI, Kokas' account of China's expanding networked sovereignty in sectors from agriculture to urban design is essential reading for anyone concerned to bring the digital world back under democratic influence." -- Nick Couldry, co-author of The Costs of Connection

"Aynne Kokas masterfully guides readers through the complex intersection between widespread data gathering, government policy, and corporate practice, illuminating the deeply troubling consequences for both national security and everyday consumers. This book is a necessary and timely resource for researchers, activists, governments, and anyone who cares about the future of democracy and a rules-based order." -- Shanthi Kalathil, co-author of Open Networks, Closed Regimes, and former Coordinator for Democracy and Human Rights, U.S. National Security Council

"Aynne Kokas' Trafficking Data is a powerful warning of the risks of the enmeshment of the American and Chinese consumer data systems. It is a clear reminder that addressing the rising digital threats from China first requires getting the U.S house in order." -- Adam Segal, Director of the Digital and Cyberspace Policy Program, Council on Foreign Relations