Believing Able Archer 83 could have been an actual attack, the Soviets had actively prepared for a surprise missile attack from NATO. This close scrape with Armageddon was largely unknown until last October when the U.S. government released a ninety-four-page presidential analysis of Able Archer that the National Security Archive had spent over a decade attempting to declassify. Able Archer 83 is based upon more than a thousand pages of declassified documents that Nate Jones, Director of the National Security Archives FOIA project, has pried loose from U.S. government agencies, British archives, as well as formerly classified Soviet Politburo and KGB files, vividly recreating the atmosphere that nearly unleashed nuclear war.

Join us on October 20th at 3:00pm in the Wilson Center’s 6th Floor Moynihan Board Room for this special presentation by Nate Jones on his new book Able Archer 83: The Secret History, with commentary by Thomas S. Blanton.

Nate Jones was also featured on CWIHP's Sport in the Cold War podcast, where he discusses the 1967 "Football War" between Honduras and El Salvador, his new book, and his work at the National Security Archive:

Nate Jones is the Director of the Freedom of Information Act Project for the National Security Archive at George Washington University. He oversees the thousands of Freedom of Information Act (FOIA) and Mandatory Declassification Review appeals that the Archive submits each year.  A two-term member of the Federal FOIA Advisory Committee, he acts as liaison between Archive analysts and agency FOIA offices, and serves as the Archive's FOIA counselor to the public. 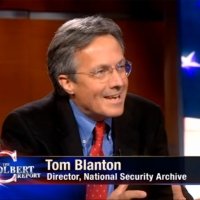