WEBCAST
This event will be webcast
Stream will begin in approximately —:—:—

The Washington African American theater community mobilized to respond to the segregationist policies of the Wilson Administration through the creation of new works which ranged from plays addressing lynching to more general works portraying the domestic life of African Americans. Thomas Montgomery Gregory, Alain Leroy Locke, and others at Howard University set out to establish a National Negro Theater based on the model of the Irish National Theater. While that initiative did not succeed, the resulting Howard Players—now 101 years old—has enriched American and Washington theater.

“Blair [Ruble] has been remarkably prolific. His latest work was The Muse of Urban Delirium, examining how new forms of performing art emerged at moments of uncertain social identity in cities undergoing rapid transformation. And if you wonder about his “Renaissance-man” credentials there's a chapter in there on Rome, on the Italian cities, on Naples and its rise, and it just opened my eyes to additional areas of Blair's expertise.”

“We're delighted that Professor Jackson could be with us. He came to academia after many years working as a community and human rights organizer and he has held a variety of jobs before that [which]were not in academia... An impressive background, he, like Blair, is a long time Washingtonian. Indeed, his entire life has been spent in Washington; it's his record of service to this community that earned him a spot in the Hall of Fame of Washington in 2009.”

“The Wilson Center is the nation's official memorial to the United States’ 28th president, and we take that mission seriously and evaluate Wilson's legacy in all of its dimensions. And we are coming to terms with, and it's framing our debate, as we examine Wilson's historical role of, on the one hand, promoting internationalism and democratic transformation abroad while pursuing segregationist policies at home with racist blinders that he had. And grappling with this contradiction in the Wilson presidency... is part of this ongoing process of evaluating Wilson's role. Today we focused on the issue of the arts in Washington D.C., but it really provided a window into a broader set of issues.”

“More than half of the 20th century regulations and laws limiting the lives of African Americans in Washington took effect during the Wilson Administration. As an acerbic editor of the African-American newspaper The Washington Bee, William Calvin Chase put it, ‘Wilson had earned the everlasting damnation of colored Americans both in Washington and across the nation.’ So it's against this backdrop that the screening of Birth of a Nation takes place in 1916.”

“[Carrie Williams] Clifford was an activist and a writer, an associate of W.E.B Du Bois and one of the original supporters of the Niagara movement. They were joined by Anna Julia Cooper, the famous activist who was born into slavery and would earn a PhD from the Sorbonne, Alain Locke the first African-American Rhodes scholar, who was teaching at Howard, Ernest Just who was a well-recognized zoologist at Howard and Thomas Montgomery Gregory who would head up the English department at Howard. This is no modest group and… just one very small kind of silly indication of the power of the group but nonetheless is telling, that half of the group members ended up on U.S. postal stamps, so these are people of real accomplishment. The group struggled with how best to challenge Griffith's reformulation of history and to do so specifically from the stage. The discussions helped to establish the contours of debates over the nature of black theater and would help shape Washington theater.”

“There is no right answer to the question of propaganda or art. It's really not either or. There are different dimensions of the same challenge, which is how do people establish their humanity? And it's the role of the arts in establishing humanity that I think is critically important. It comes out in theater, it definitely comes out in music, and you know when we focus on politics all the time, we tend to forget the human that underlies a lot of these tensions. And once you understand that we're talking about humans trying to express themselves, they're expressing different dimensions of themselves, they're expressing anger. They're expressing frustration; they're also expressing the reality that ‘I am here and should be recognized and respected.’ And I think the so-called difference [between ‘propaganda’ and ‘art’ may be seen] in all the discussions of the 1990s around the work of August Wilson. The criticism he took for declaring himself a race man, it's the same discussion and of course if you take a look at the Wilson discussion, you had critics saying, ‘Well there's a universal humanity and why are you peddling your particularistic point of view.’ But of course, that universal humanity is defined not by Wilson, but by white American critics who are criticizing him.”

“You know, you look at a person like Ernest Just, who's a zoologist long before... you know now the big term is interdisciplinary, but Ernest Just was a world-class zoologist… but also, he was a man who was deeply engraved in the work of the drama and the fear at [Howard University]. Always, you saw there this movement of African-American people across many, many worlds, all moving towards one goal, that is towards freedom and democracy.”

“You know Isabelle Wilkerson talks about a caste divide, but in Washington you really did have a caste system and so forth amongst a certain levels of blacks. So all of these things are coming in attention. That's why…the theater has the ability to not just reenact, but to put a lot of history in one place... some things you can't do with poetry; in the theater we have a way because you can tell a whole totality.”

“John Coltrane wrote a tune called Alabama and [there] was a debate about [how] John Coltrane wasn't political. Well, who would name anything Alabama unless it has some politics… what black man growing up… is going to name something Alabama with the way people are being treated?... I've just been reading about a woman, Alma Thomas, who was the great folk artist of Washington… just a lady who didn't go out and necessarily preach civil rights or anything, but she had her art and she drew two pieces of art around March on Washington. Two different ones. She didn't have to say a word about it but it expressed her view.” 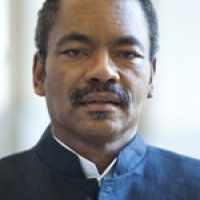