On November 16th, 2017, the Wilson Center Africa Program held the third annual Signature Event of the Brown Capital Management Africa Forum. This year, the topic of discussion was supply chains and their impact on trade and development in Africa. Congresswoman Jane Harman, the President and CEO of the Wilson Center and Mr. Keith A. Lee, the President and Chief Operating Officer of Brown Capital Management offered opening and welcoming remarks respectively. Mr. Seward “Skip” L. Jones, Jr., the Deputy Assistant Secretary for Middle East and Africa of the International Trade Administration of the United States Department of Commerce, provided the keynote address. The panel was comprised of Ms. Laura Lane, the President of Global Public Affairs of UPS and Vice Chairwoman of the President's Advisory Council on Doing Business in Africa (PAC-DBIA); Mr. Chris Folayan, the Founder and CEO of MallforAfrica; Ms. Sandra Uwera, the Chief Executive Officer of the Common Market for Eastern and Southern Africa (COMESA) Business Council; and, Mr. Tielman Nieuwoudt, the Principal at the Supply Chain Lab, South Africa.

In his keynote address, Mr. Skip Jones highlighted the commitment of the U.S. Government to continued economic and trade engagement with Africa, particularly with African countries that are committed to self-reliance, which is a high priority for the Trump Administration. He noted that the consumer class and the purchasing power of Africa is growing at an incredible rate; by 2025, an additional 90 million Africans are expected to enter the consumer class, with a combined purchasing power of USD $2 trillion. U.S. exports to Africa have doubled since 2000, up to USD $22 billion in 2016. Africa’s integration into global trade is a key engine for economic growth on the continent, and augmenting trade constitutes a significant opportunity for Africa. He emphasized, however, that this is contingent on African countries taking measures to improve their business climates and reduce man-made trade barriers and costs. According to the African Development Bank, Africa currently faces the largest trade costs of any region in the world. Slow and inefficient transportation, including poor roads and frequent internal check points have created significant man-made barriers to trade. He noted that, from his vantage point, signing and implementing the World Trade Organization Trade Facilitation Agreement (TFA) would be a positive step towards reducing the man-made trade costs that hurt African competitiveness in global markets. World Bank research further suggests that the greatest benefits of the TFA would accrue in developing countries, and it would aid the delivery, trade compliance, and small business sectors, among others. Many African countries have a lot of work to do to in order to ratify and implement the TFA, and the U.S. Department of Commerce could play a partnership role in encouraging implementation and helping African countries take advantage of commercial opportunities afforded by the TFA.

Ms. Laura Lane provided updates on the work of the President’s Advisory Council on Doing Business in Africa and spoke to key lessons learned and best practices from UPS’s vast global experience, including delivering to 51 African countries. She emphasized Mr. Jones’ point about the importance of trade facilitation for promoting growth. For supply chains to function in Africa, Ms. Lane placed a priority on making borders less thick and more efficient, and reducing bureaucratic red tape and corruption. She noted that when items get held up in customs, it is bad for business, hurts trade, and thereby stymies development. Ms. Lane remarked on four key customs issues that must be addressed to mitigate supply chain challenges: the lack of pre-arrival clearance, the need to transition from paper to electronic documentation (which would also cut out the middle man and therefore reduce opportunities for corruption), the need for the establishment of de minimis tariff levels, and the ratification of the TFA. UPS and other international entities have partnered to offer practical assistance to African countries; Ghana and Kenya already have projects underway to establish pre-arrival clearance processes, and there are pipeline projects in Nigeria, Malawi, and Zambia. As the Vice Chairwoman of the President’s Advisory Council on Doing Business in Africa, Ms. Lane noted that she a big believer in the opportunities for promoting trade and development in Africa. She pointed out three key recommendations for bolstering engagement, including demystifying the opportunities that Africa has to offer for international businesses, encouraging businesses to compete across Africa, and identifying key policy changes that need to be made to bolster trade within and with the continent.

Mr. Chris Folayan shared his approach to addressing Africa’s supply chain challenges by offering lessons learned from his company, MallforAfrica. His company has been able to successfully solve many of the challenges that retail companies face in African markets, including concerns about fraud, inefficient shipping and delivery, and conversion of foreign exchange rates. MallforAfrica reduces the risks associated with doing business in Africa by handling many of the logistical aspects of selling American and British goods in Africa. According to Mr. Folayan, the primary obstacle was shifting international perceptions in order to get merchants to see Africa as a continent where they can successfully do business. Mr. Folayan started MallforAfrica in Nigeria, a country that faces some of the largest man-made barriers to trade. Based on his experience, Mr. Folayan’s key recommendations were to focus on a few core issues: provide people with information about trading in Africa, educate vendors on how to meet global standards, and facilitate communication between buyers and merchants. One significant obstacle going forward is remedying Africa’s weak infrastructure in order to facilitate the efficient and timely delivery of goods. Technology could play a role in closing gaps and getting African goods to markets within the region and globally. One example of technology providing a platform to facilitate trade is the “Out of Africa” campaign started in partnership with eBay, whereby items made by African artisans are sold internationally over a smart phone platform. Finally, Mr. Folayan noted that his story shows that while policies are important, it is not necessary to wait for policies to made at the top; innovative, entrepreneurial solutions can be put in place from the ground up to address some of Africa’s supply chain challenges.

Mr. Nieuwoudt outlined some of the main logistical challenges present in many African countries, including difficulties in customs, fragmented retail markets, low urbanization rates, and long dwell times in ports. Ethiopia, for example, lost access to the sea once Eritrea became independent. Due to poor infrastructure, it was difficult for goods to reach the population; in fact, analysis from the Supply Chain Lab suggests that goods could only effectively reach 15 percent of the Ethiopian population. Another issue for business is lack of finance and cash flow. Ethiopia provides a mirror of some of the complexity and challenges that Africa faces with logistics, as it represents one of the largest landlocked countries with a highly fragmented retail market and low urbanization rate (about 20 percent). Some successes and lessons learned can be gleaned from the case of the East African Community, where the Logistics Performance Index (World Bank) shows significant progress in decreasing dwell times and increasing logistical efficiencies. East Africa’s experience contrasts with other African and world regions, where landlocked countries are performing much worse than their coastal neighbors. International actors can provide support to African countries trying to reach global standards, close infrastructure gaps, and access technology and data. Drone delivery of medical supplies in Rwanda, for example, is an innovation that has helped address the difficulties of delivery in a region where many businesses lack addresses and access to reliable infrastructure. Mr. Nieuwoudt recommended that trade agreements must have long-term focus and address finished goods, rather than the current agreements that are short-term in nature and which are centered around raw materials; special economic zones must be more strategically positioned; and, there should be more investment in cultivating a workforce with the skills required to get African companies up to global accreditation standards. Public private partnerships can also constitute solutions to some of the most pressing challenges in trade in Africa.

Ms. Uwera drew on her experiences as the Chief Executive Officer of the COMESA Business Council, describing the challenges to doing business in that region and the practical interventions that the Council has undertaken to address them. One key issue is low consumer confidence in African products and lack of standardization in compliance, which arises from a lack of appropriate regulatory policies and has contributed to low intra-African trade. The COMESA Business Council has focused on practical intervention, starting a Local Sourcing for Partnerships initiative in six countries to investigate why companies are not sourcing from local markets and working with companies to increase their use of local goods. The COMESA Business Council targets the agricultural sector especially, as three quarters of SMEs work in this sector. Ms. Uwera noted that key challenges that she has observed include the lack of online platforms and the high cost of business certification, often around USD $35,000, which is prohibitively high for most African SMEs. African companies need to establish online platforms in order to sell their goods on the global market, which requires the use of technology and harmonization of platforms. Another key challenge is the lack of communication, particularly on the SME level, and a lack of understanding of the market demarcation that businesses could tap into on the regional level. Bolstering regional consortia and partnerships could help address these challenges. The COMESA region is moving towards harmonizing and domesticating regulatory frameworks. International businesses that invest in Africa must also understand the need for more transformative corporate social responsibility models, including those that work to transfer knowledge and technology to their local counterparts, particularly SMEs. She concluded by emphasizing that from her perspective, the most vital piece of the equation is to inspire more confidence among consumers and businesses in order to connect Africa with the global market, and the U.S. and Africa can work together toward this goal. 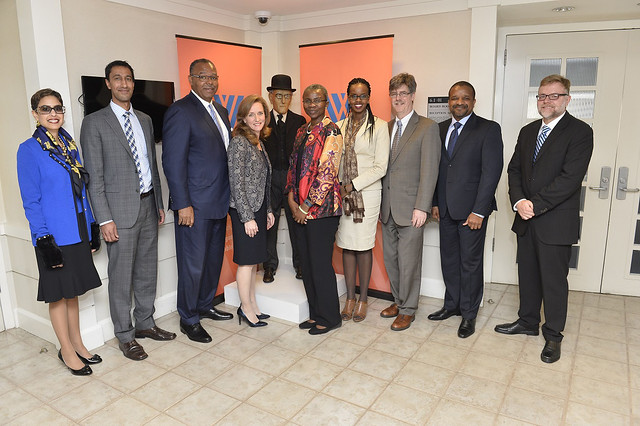