Webcast will appear on this webpage
This event will be webcast live
Live stream will begin in approximately —:—:—

NOTE: please email questions for the Q&A session to Polar@wilsoncenter.org

On September 10, 2019, the Government of Canada launched Canada’s Arctic and Northern Policy Framework (ANPF). This whole-of-government Framework will guide the Government of Canada’s priorities, activities and investments in the Arctic and North to 2030 and beyond and will better align Canada’s national and international policy objectives with the priorities of Northerners. The Framework replaces Canada’s Northern Strategy (2010) and the Statement on Canada’s Arctic Foreign Policy (2009).

The ANPF is a profound change of direction for the Government of Canada in its Arctic policy. In a significant shift, the federal government, Indigenous peoples, Inuit, First Nations and Métis, 6 territorial and provincial governments (Yukon, Northwest Territories, Nunavut, Newfoundland and Labrador, Quebec, and Manitoba) contributed to this framework together to outline new Arctic and Northern policies.

“The Arctic region has already experienced some of the most rapid climate change impacts seen anywhere. Northern communities and indigenous people are some of the most exposed to the impacts of climate change, which impacts infrastructure, resources such as food and water, and physical and mental health. To respond to this ever-changing physical environment, collaboration with and among governments at all levels and indigenous communities, scientists, the private sector, technical and policy experts both at home and abroad is ever critical.”

“What we do share is a common belief that economic development in our North is important. Where we do sometimes have differences when economic development might challenge certain other priorities we have, whether it be the migration of caribou through certain parts of our North or when and how to exploit the natural resources, the hydrocarbons.”

“I think it’s fair to say that China is interested in the Arctic because it sees itself as a great power, and great powers have interests all around the world. The Arctic is an important part of the world and is increasingly seen as such. They want to send that message out and be a part of its development and be a part of the benefits that derive from it. What is important is that China understands it must do it within the framework of international laws and rules and go about that cooperatively in strict adherence to those that are established by our international institutions and those areas where we as other countries have very direct interests.”

“A lot of Northern policies in Canada have been really made in Ottawa for the purposes of the central government and really focused around the economic and strategic potential of the North, which is of course very important. I think one of the things that really distinguishes the Arctic Northern Policy Framework is its focus on people who live in the North and the voices of Northerners. One of the things I think we did achieve through the co-development of the document is that it really captures the voices of Northerners and is not only a bureaucratic document.”

“Even before COVID-19, we have a number of programs which are looking to reduce the reliance on diesel in Canada’s North and are felt by Northern communities even now. This is something that pervades all of our thinking about our Northern parties.”

“We also know that in our Northern communities youth are incredibly important in terms of shaping the future because with climate change, some of the markers of the past are not working for communities in the way they used to. Youth are really important as people create visions for their communities going forward.”

“I have had some experience of my own in the United States government trying to create similar policy statements, once in the administration of George W. Bush and once in the Obama administration, and I know how hard this is. When we did this twice, we made at least some effort, in our case, to reach out to the state of Alaska, Alaska natives, and other stakeholders, but we didn’t go nearly as far as Canada has in co-producing the kind of policy statement you have, and it’s really commendable and policy for the future.”

“Canada and the U.S. have a difference of opinion on the status of the Northwest passage and the right of vessels to go through there, and as good neighbors generally, we have managed that difference of view and it has not caused serious contention and nor do I think it is causing serious contention now. Over the long term, if the Arctic⁠—as everyone expects it to⁠—continues to melt, and if significantly more shipping winds up going through or being capable of going through the Northwest passage, it may be incumbent upon the two governments to figure out a way to accommodate both points of view on this and manage the shipping that is coming through Northwest Passage...We have common interests in ensuring safe and secure shipping through there, so we need to find a way to set aside our differences or accommodate them.”

“There are plenty who are concerned that China will use its economic clout to gain undue influence, at least in certain parts of the Arctic through offering investments or other economic incentives. When the United States government reacts against Chinese involvement in the Arctic, it’s usually having to do with that. China, is of course, also heavily engaged with Russia in the development of the Russian Arctic at a time when the United States, Canada, and other countries are still imposing sanctions on Russia, so these are the types of frictions that come up, but at least within the Arctic Council process, and I would also add the negotiation of an agreement I was involved in giving to future Arctic fisheries, China was and remains a cooperative and useful player, also in fostering scientific cooperation in the Arctic.”

“Between Harper in 2009 and the Trudeau government in 2019, you see the Arctic is not as partisan. It seems to have support from all Canadian parties. U.S.-Canada tensions are limited, and we’re working together as you both pointed out in a very positive way. Economic development and the livelihood and concerns of the people who live in the region, plus scientific cooperation have much bigger roles, and that local engagement, and maybe the middle piece, infrastructure, whether it’s defense infrastructure as Ambassador Sproule was saying or infrastructure for improving the quality of life of Northern people, to me this is the backdrop of this strategy, and for me, it’s been a long time coming.”

“I think we’ve talked a lot about rights in the Arctic, who has the right of various passages, but toward the end of the George W. Bush administration, there really was a sort of shift in tone for the responsibilities we had for search and rescue, maritime ships or sailors in distress, oil spills and other things, and it seems to me that has a very different frame although we both agree we want these things done, we have to make some investments in infrastructure, perhaps a deepwater port in the Eastern Arctic or other things.”

“Putting my professorial hat on, I am struck by how inspired the younger generation, sort of in college and grad school now, is by the kind of work you’ve been doing. The Arctic has captured people’s imagination, but it has a presence. In this world of teleworking because of COVID, distance can be shrunk, obviously if the bandwidth is okay and we don’t lose people.” 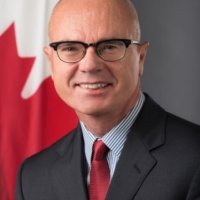 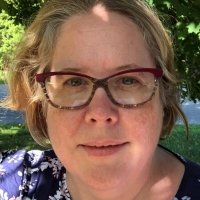