A Conversation with President Lenín Moreno of Ecuador

COVID-19 has presented monumental challenges throughout Latin America, including in Ecuador, where the virus has stressed the public health system and contributed to the plummeting price of oil, the principle export. Before the pandemic, Ecuador’s government was already struggling to address a high debt burden. Recently, however, Ecuador has taken important steps to restore economic growth. In early August, it successfully restructured its $17 billion debt to private creditors, overcoming a major hurdle for attracting new investment. Later that month, Ecuador announced a $6.5 billion program with the International Monetary Fund, a significantly larger loan than its previous agreement, which will help Ecuador navigate the coronavirus’s economic fallout.

In our discussion, we explored Ecuador’s path out of the global health and economic crises, its warming relations with the United States after a decade of tensions, and Moreno’s priorities before the February 2021 presidential election.

This webinar is the first installment of the Latin American Program’s “Crisis Conversations,” a new series of dialogues with Latin American leaders about overcoming policy challenges during this pandemic.

"We were the first country in Latin America to close borders, declare a curfew, and limit activities such as public performances and the transit of people and vehicles. In addition to that, we implemented strict regulations, strict security protocols, and we dedicated ourselves to strengthening our health system, which was nearly falling apart. It is the truth."

"We took advantage of the pain [the pandemic] caused us to learn how to do it [manage the country amidst the coronavirus outbreak], and we did learn how to. This is why we currently have the lowest rates of deaths in Latin America."

"In the midst of all, we have created a law that prohibits the increase in rates of basic services and their suspension. No basic service was suspended during the emergency, and evictions were not allowed for lack of payment or lack of defaulted leases."

"[Socialism] It is a myth, and someone will ask: why after so much failure of socialism and communism in the world? Why are there people who still persist in doing it? Because a myth is the hardest thing to get out of people's minds."

"A good work was done, good decisions were made toward the most vulnerable people, of those we considered to be abandoned and forgotten. For a moment I said this in a colloquial way. But suddenly, things started to drift apart. Perhaps the excessive enthusiasm that the president had made him think that those who thought differently had no right to do so. It was an issue on which we always had opposition, we never agreed. I became an advocate of the media outlets because, regardless of the fact that they are extremely harsh on more than one occasion, I believe the president must be more than tolerant with regard to freedom of expression. More than tolerant."

"[Regarding the relationship between Ecuador and U.S] Why walk away from our main business partner?"

"[Regarding the relationship between Ecuador and U.S] Excellent because we have [a] friendly relationship, regardless of the ideological position that the authorities elected by the United States have […] and this is one of the things that a president of another country must respect. Each country has the right to decide, to choose the authorities it deems appropriate. So with President Trump, with the Vice President, we have made a good friendship."

"The relationship with the United States is excellent, excellent in every way."

"With regards to the issue of Mr. Assange, I have never had faith in hackers. I have never believed in political voyeurism, ever. I do not believe in this way of doing journalistic investigation, in any way." 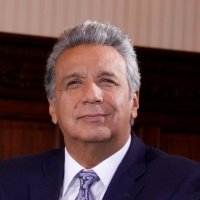