"Family planning is one of the biggest success stories of development cooperation," says the Dutch Minister for Development Cooperation during a roundtable discussion on the future of family planning and reproductive health.

"Family planning is one of the biggest success stories of development cooperation," said Bert Koenders, Dutch Minister for Development Cooperation, via video at a roundtable discussion on the future of family planning and reproductive health. Koenders was followed by representatives of three of the field's largest donors, Musimbi Kanyoro, director of the David and Lucile Packard Foundation's Population and Reproductive Health Program; José "Oying" Rimon, senior program officer for Global Health Policy and Advocacy at the Bill and Melinda Gates Foundation; and Scott Radloff, director of USAID's Office of Population and Reproductive Health. 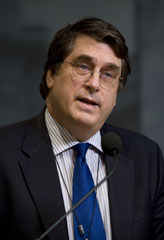 Radloff said his organization has "success stories in every region of the world." USAID's family planning and reproductive health programs have shown positive gains over the last few years, especially in Latin America where "most countries have graduated from bilateral assistance or are in the process of graduating," he added.

Rimon lauded the strides made within developing societies where contraceptive use has become the norm. Since the 1960s, the contraceptive prevalence rate in developing countries has increased from ten per cent to about 55 per cent; which, in turn, has prompted the total fertility rate to fall from fall from six children to about three in the same time frame, he said.

Rimon was even more hopeful about the future of the field, as he claimed that "the decline for family planning/reproductive health resources, which has been happening since the mid 1990s, has been reversed." Since 2006, the amount of resources allocated to family planning has steadily risen.

While funding for family planning has been gaining momentum in recent years, it still faces enormous obstacles. "The biggest challenge," said Koenders, is investing in youth—more than half the world's population. "We should acknowledge the needs and rights of adolescents and young people—married and unmarried—in the field of sexual and reproductive health," he said.

Koenders also stressed the need to find common strategies to "counterbalance…growing opposition to sexual and reproductive health and rights," as it is "not only about abortion." The reproductive rights of women and girls are "closely linked to the deeply rooted imbalance in power relations between women and men, and the increasing sexual violence against women."

Nowhere is this challenge more acutely observed than in "the poorest countries of the world, in Africa and South Asia," said Radloff. If "you look across the countries of Africa, the countries that are lagging behind in terms of increasing contraceptive use and availability of contraceptives, it's largely Francophone West Africa."

Kanyoro said the Packard Foundation will "take a good look at what is happening in sub-Saharan Africa so that we can be able to address some of those areas that are the weakest in the link." The foundation's plans include high-level advocacy "to make sure that these messages go across not just one country but several countries and even, if possible, benefit from inter-regional work."

Opportunities in the Obama Era 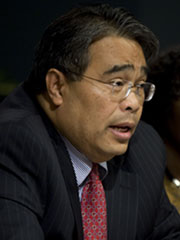 "I'm an optimist," said Rimon, who sees opportunities amid these myriad challenges. Not only has the long decline in funding being reversed, but there is a "major trend towards more effective and better policies, and I think here in the U.S. we have seen that: rescission of the Mexico City policy, the new guidelines in PEPFAR, and some with the new changes and policies that are also seen in Europe."

Radloff agreed that USAID has seen "positive engagement of the administration on reaffirming U.S. support for the MDGs, including MDG 5b and improving access to reproductive health information and services and reaffirming support for the ICPD [International Conference on Population and Development] program of action." He also found it encouraging that "many bilateral donors, multilateral donors, and foundations are now very interested in working closely with USAID in advancing these programs…the environment, in general, is much better than it's been at least since 1992, and perhaps even ever."

"We have, in addition to having strong support in our administration, both a president and a secretary of state that speak out passionately about the need to reduce unintended pregnancies and to make family planning more widely available," Radloff continued.

"We have family planning and reproductive health included as a priority under the Global Health Initiative which was announced by the President back in May. That initiative encompasses family planning, reproductive health, maternal-child health, and various infectious diseases, including HIV, TB, and malaria. The fact that he placed these under a single initiative, rather than creating two new initiatives for family planning and maternal-child health signals his interest in ensuring that we integrate these programs to the extent practical."

Sustaining Progress Over the Long Term 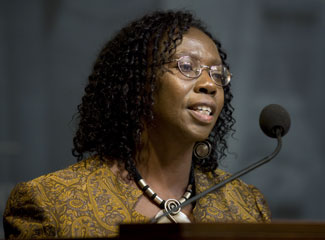 "I come from Africa, and I know that we can literally grow anything. We can have every small project. But the really big difference is when those problems are brought to big scale," said Kanyoro. Developing the capacity of local leaders—particularly women—is necessary to make sustainable gains in the field, she said, as well as collaboration between government donors and private funders to drive innovation. "I think private money is really good for paving the way, but I think that private money and government money [are] really what makes the biggest difference in scale."

Radloff agreed that we should not view the sectors "as independent of each other, but interrelated." Governments should partner with the private sector to "develop strategies that incorporate the contributions of private sector and public sector, and acts in ways that improves the environment for private sector investments and involvement," he said. Such collaboration will lead to success: "Almost uniformly, where we graduate countries, is where there is a strong private sector providing services to those who can pay."

Drafted by Kayly Ober and edited by Meaghan Parker.

The Bill and Melinda Gates Foundation

Minister for Development Cooperation, The Netherlands