Heightened Political Repression in Russia: A Conversation with Vladimir Kara-Murza

The Kremlin’s efforts to silence the Russian opposition have only increased since the attempted poisoning and subsequent imprisonment of Alexei Navalny. From expanding foreign agent legislation, to labeling organizations that promote free and fair elections as “extremist,” to imprisoning Navalny’s supporters and other opposition activists, the Russian government is unwilling to allow even activities that were normal only a few years earlier. Vladimir Kara-Murza, a Russian opposition politician and chairman of the Boris Nemtsov Foundation for Freedom, described the increasingly repressive political atmosphere in Russia today, looking ahead to the Duma elections later this year and beyond —and what the future could hold given the growing anti-Putin sentiment in Russian society.

Vladimir Kara-Murza
"We are speaking on a symbolic week. This week marks the Centennial of Andrei Sakharov, the great Russian scientist, humanist, and dissident, once of the great citizens of my country. The biggest and most respected European human rights prize awarded annually by the European Parliament is named after Andrei Sakharov and, you know, every time I hear, which I still do astonishingly often, not as often as before but still in Western audiences, these sort of old, tired, and offensive stereotypes that, you know, these Russians are somehow not made for democracies, are not ready for democracy, that they can’t live under democracy. I have a few things I can remind people of, but one of the things I remind them of is that the largest, the oldest, the most respected European-wide human rights prize is named after a Russian citizen…Just as then, today we have a repressive authoritarian state that denies its citizens the most basic rights and freedoms, including freedom of speech and of the press. We have media outlets that serve as tools, aggressive and hysterical tools, for all government sponsored propaganda. We have elections that, just as in Soviet times, are meaningless rituals with predetermined results. Just as in Sakharov’s time, we have state-sponsored political repression."

“There were snap surveys conducted at the protests in January… in support of Navalny, which showed that the median age of those people, of those hundreds of thousands who attended those protests… was thirty-one years of age. Now that generation is the future of Russia and Vladimir Putin isn’t. And at the end of the day there’s nothing the Kremlin is going to be able to do about that.”

“A Russian politician has to be in Russia, it’s as simple as that. The biggest gift we could give to the Kremlin would be to run away and it’s just not going to happen.” 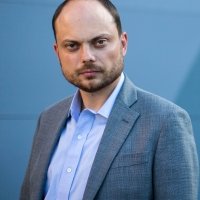