The Wilson Center’s Global Health Initiative was in Nairobi for a two-day workshop with key Kenyan leaders, who identified action steps for improving the health system through a maternal health framework.

“The traditional strategies for improving the health system include the horizontal approach, which prioritizes non-communicable diseases, and the vertical approach which prioritizes communicable diseases such as HIV/AIDS,” said John Townsend, vice president of reproductive health programs at Population Council, during a webcast discussion between the Woodrow Wilson Center in Washington, DC, and maternal health experts in Nairobi, Kenya.

Recently, a third strategy, called the “diagonal approach,” was developed to more clearly define health system priorities and guide general system-wide improvements. Participants in both locations discussed this new approach and other structural improvements that can be made to better integrate maternal health indicators into developing country health systems on October 17.

The meeting was part of the 2011 Advancing Policy Dialogue on Maternal Health series, with the Wilson Center’s Global Health Initiative and the African Population and Health Research Center. Participants in Nairobi were assigned to three topical groups and asked to identify challenges and opportunities related to their themes.

The Role of Policymakers and Funders 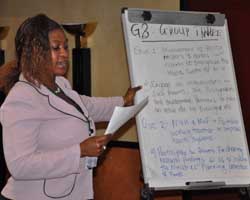 “We must engage [policymakers and donors] in forums like this one to share findings and share lessons learned,” said participant Sylvia Bushuru of Kenya as she reported back from the policymakers and funders working group. The group focused on steps required to hold politicians accountable to commitments made to maternal health, such as the Abuja Declaration, which requires the Ministry of Finance to dedicate 15 percent of the budget to health. Currently, only 5.5 percent of the Kenya budget is dedicated to the health sector.

Identifying strategic partners will help in reaching ambitious goals, the group agreed; however, they noted that it’s important to ensure that these partnerships and policies extend to an operational level. Besides the overall budget pledge, important steps like ensuring 24-hour emergency health facilities in rural areas and implementing a results-based financing plan based on maternal health indicators have yet to be completed.

A Definition of Priorities through a Diagonal Approach

James Wariero, a regional health advisor with the MDG Centre for East and South Africa, served as the representative for the group discussing the “diagonal approach,” which focused on how maternal health indicators can best set priorities to improve the overall health system. They identified antenatal care visits as a priority because they also serve as an entry point to other health services, including HIV/AIDS treatment.

Discussing gender, he said that “male involvement in maternal health will have benefits for child health and other issues...it is an area with little headway here in Kenya and other similar countries in Africa.” Additionally, Wariero discussed how the diagonal approach could be used to link maternal health indicators with other sectors such as technology and information systems.

The group said that improving the health system should start at the district level to ensure the most vulnerable populations at the community level have proper access. However, they said that ideally district-level programming should be evaluated and funded through results-based financing and structured on clear maternal health indicators. 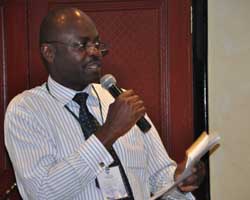 “We initially began our discussion surrounding the [World Health Organization’s] six health system blocks,” reported Dr. Kristine Kisaka, a program officer with Deutsche Stiftung Weltbevoelkerung and representative from the “knowledge gaps and research needed” group. This group identified access to mobile phones for maternal health data collection as a major resource gap. Instead of calling for additional research they said they would prefer better implementation of existing, evidence-based programming.

1.      Strengthen community strategies through a national synchronization of information

2.      Harmonize planning and implementation of the provisioning of supplies and commodities at the community level

3.      Address inequalities in the distribution and delivery of health services, ensuring distribution to urban and rural centers, including slums

4.      Centralize health financing in order to reach both national and community levels

5.      Empower households in financing, including both women and men, so they plan and save for maternal health

6.      Address the imbalance in supply and demand of healthcare workers

Kisaka added that there is already a large body of evidence and research that has been accumulated on maternal health, “what needs to happen now is a national effort to consolidate and organize this information to make it accessible at all levels,” she concluded.

“It’s really about linkages,” said John Townsend, giving closing remarks after the presentations from Nairobi. Maternal health indicators can be a catalyst for change, due to their strong cross-cutting links to other development systems, such as transportation, the economy, and education. “I think the call to action that the Kenyan working groups made is quite valuable,” he said, but the question is, “How do we get intelligent decision alternatives in front of our leaders to figure out what are the best investments given the critical resources?”

“The private sector [presents] an opportunity,” said Townsend. “I think we need to be more explicit about how we want to engage with them and what we would like to see from them.” He pointed out that the national maternal health strategy in Kenya is explicit and promising, but there needs to be stronger links between the national strategy and the operational aspects of actually implementing it.

About the 2011 Maternal Health Dialogue Series

As one of the few forums dedicated to maternal health, the Woodrow Wilson Center’s 2011 Advancing Dialogue on Maternal Health series brings together senior-level policymakers, academic researchers, media, and civil servants from the U.S. government and foreign consuls to identify challenges and discuss strategies for advancing the maternal health agenda.

In order to promote greater voices from the field, the 2011 dialogue is partnering with the African Population and Health Research Center in Kenya to co-host a two-part dialogue series with local, regional, and national decision-makers on effective maternal health policies and programs. These in-country dialogue meetings will create a platform for field workers, policymakers, program managers, media, and donors to share research, disseminate lessons learned, and address concerns related to policy, institutional, and organizational capacity building.

The Wilson Center’s Global Health Initiative is pleased to present this series with its co-conveners, the Maternal Health Task Force and the United Nations Population Fund (UNFPA), and is grateful to for further technical assistance from USAID's Bureau for Global Health.