Six leading Iran experts discussed the country’s domestic and international developments since the contested 2009 presidential elections, looking at how the Iranian regime has managed its internal political, economic, and social affairs as well as its foreign policy.

Six leading Iran experts discussed the country’s domestic and international developments since the contested 2009 presidential elections, looking at how the Iranian regime has managed its internal political, economic, and social affairs as well as its foreign policy.

Bakhash described Iran’s domestic political environment, which he indicated has become increasingly authoritarian with ideological conformity, show trials, and public confessions. Bakhash also discussed the power struggle between President Ahmadinejad and Supreme Leader Khamenei, noting that the two leaders have largely repaired relations since the dismissal and reinstatement of the Minister of Intelligence but that the appearance of a split has allowed other grievances with Ahmadinejad to come to the surface.

Analyzing the internal and external pressures on the Iranian economy, Khajehpour discussed how subsidy reforms, corruption, financial mismanagement, and Ahmadinejad’s agenda to empower inner government circles have contributed to high unemployment and inflation (despite three percent annual growth). He noted that the domestic power struggle is increasingly about economic interests, not ideological ones.

Toscano looked at the role of education in Iranian society and politics, noting that what characterizes Iran is the perceived value of culture and education, even by the regime. In Iran, he said, “populism is not anti-intellectualism.” Nevertheless, the regime considers social sciences to be vehicles of Western influence; they are treated with suspicion and their curricula are restricted at times. Toscano said for Iranian democrats to succeed, they must defend education and culture as they construct a different political alternative.

Parsi discussed the trends in diplomatic relations between the European Union and Iran. He said the issue of sanctions presents a fundamental impediment to diplomacy and indicated that sanctions are a symptom of a lack of strategy. While the EU continues to impose sanctions until the nuclear issue is resolved, Iran uses sanctions as an excuse to refuse talks. Parsi suggested trust-building in non-nuclear areas as the most obvious solution. 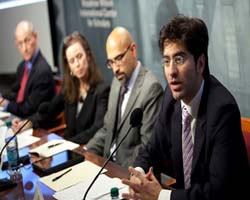 In looking at Iran’s relationship with the Persian Gulf states, Molavi highlighted past relationship trends and commented on how the “Arab Spring” presents a new “geo-political chessboard” to which Iran and its Gulf neighbors must adapt. While the Arab Spring seemed to present Iran with a golden opportunity to represent itself as a pan-Islamic champion of freedom and democracy, Molavi said its refusal to criticize Syria, a strategic ally, showed the weakness of Iran’s dependence on such allies.

Adler discussed Iran’s relationship with the United States with particular emphasis on the nuclear issue, a long-standing policy tool used by the Iranian regime that has worked successfully to date. He said the future of the nuclear standoff involves two principle strategies: diplomacy and sanctions. Adler stressed timing as a key element in the negotiations process; because Iran still faces obstacles to assembling a possible weapon, the United States believes they have time, at least 18-24 months, before real engagement with Iran becomes necessary. 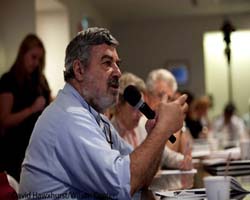 Rami Khouri, former Wilson Center Public Policy Scholar, commented on perceptions of Iran’s role in the Arab Spring. He said that people are becoming less interested in Iran as a spokesperson against foreign powers and Israel because of the strengthening of their role as well as the emergence of a new regional power in Turkey. Khouri described the development of the “Arab citizen” and the changing roles of Arab states, Islamists, and foreign powers as major forces shaping the Middle East today.