NATO and the Women, Peace and Security Agenda: A Conversation with Clare Hutchinson

The Women in Public Service Project was pleased to welcome Clare Hutchinson for a conversation on the Women, Peace and Security priorities for NATO and her vision for inclusive security at the organization.

NATO and the Women, Peace and Security Agenda: A Conversation with Clare Hutchinson

The nexus of women, peace, and security is gaining notice worldwide as a critical dynamic in international security policy. As this conversation continues, key international organizations, including NATO, are placing greater emphasis on integrating gender considerations in the execution of international military and diplomatic actions.

Clare Hutchinson is one of the leading voices in this effort as the NATO Secretary General's Special Representative for Women, Peace and Security. In advance of the NATO summit in Brussels, the Women in Public Service Project was pleased to welcome her for a conversation on the women, peace, and security priorities for NATO and her vision for inclusive security at the organization.

“NATO has increasingly taken the UN’s imperative established in Security Council Resolution number 1325… [that] links the role of women to peace and security. They have understood that and taken that leadership in a serious way.”

“In the military venue particularly, the whole issue of operational effectiveness is paramount in ensuring why the integration [of women] matters.”

“We must get more women into leadership positions around the world. We must do better in having women have strong voices and articulate those voices at the table…We need to empower them. We need to hold firm to our commitments on women, peace, and security, and say that if women’s voices aren’t present, we’re failing.”

“What we have to do is start changing internationally the mindset around, ‘Is this a man’s role or is this a woman’s role?’ And we need to firmly put in place why it’s important to also have these spaces open to women as well, because it’s not about having women in the military; it’s about having militaries do their effective work in the application of their duties.”

“I think what we have to understand is women, like men, come from many different viewpoints. Not all women are in one part of the world singing songs of peace, right? We have to accept that. And not all men are perpetrators of violence. What we need to do is bring in the nuanced understanding of what women bring, and I believe women should be in a space simply because they have a right to be there.”

“I’ve worked in conflict situations, and what I see often… is that during periods of conflict, it's women who lead the communities... So how are we ensuring that we’re taking that perspective –what’s going on at the community level –into peace and security discussions?”

“You want the women not because there is a particular leadership style, and not all women lead the same, but we want to be around all the decision-making tables, offering their perspective, and hopefully offering the best policy solution that we can muster when you have the other half of the population sitting at the table.” 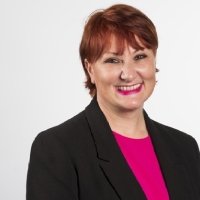