A New Day for U.S.-Tanzania Relations: A Conversation with H.E. Samia Suluhu Hassan, President of the United Republic of Tanzania

The Wilson Center Africa Program was pleased to host A Conversation with H.E. Samia Suluhu Hassan, President of the United Republic of Tanzania. President Samia discussed her vision for Tanzania and U.S.-Tanzania relations during a candid conversation with Ambassador Mark Green, President and CEO of the Wilson Center and former U.S. Ambassador to Tanzania from 2007-2009. They explored new models of aid with a focus on trade and mutual benefits, lessons from COVID, education for adolescent mothers, and more.

1. Tanzania is open for business and investment: The government of Tanzania has embarked on a series of reforms to make Tanzania a more attractive partner for business, trade, and investment with the United States and others around the world. In stark contrast to the late President Magufuli, President H.E. Samia Suluhu Hassan is openly embracing the private sector as an important part of Tanzania’s future, inviting investors in order to create economic growth and development, and reviewing policies to create legal and fiscal reforms to create a favorable and conducive environment for the private sector to thrive in Tanzania. These measures have begun to yield results. While, in 2011, Tanzania recorded double the number of Foreign Direct Investment (FDI) projects for that year compared to previous years, the growth in FDI began to slow in the Magufuli Era. From 2019–2020, Tanzania recorded FDI projects equaling $1 billion; however, in 2021, FDI projects increased to approximately $8 billion dollars. With progress being continually made, Tanzania seems ready to take off.

2. Reaffirming democracy and good governance: In the one year that President Hassan has been in office, she has taken several steps to promote reconciliation among political parties and strengthen democracy in order to ensure peace and national cohesion. Key measures include engaging in talks with political parties, lifting ban on a number of the media, and establishing a task force consisting of political parties, religions leaders, and civil society organizations to look into governance gaps and make recommendations for addressing those gaps.  In addition, parliamentary debates are once more open to the general public.

3. Enhancing education and addressing COVID-19:  President Hassan reversed a previous ban that denied adolescent mothers the ability to continue their education (blazing her own path in just a year since starting her term). While Tanzania has a policy that provides free education to every child, both girls and boys, the previous ban on adolescent mothers going back to school was mostly affecting the poorest families who did not have the resources to send children to private school. The government made the decision to repeal the ban and allow every child—boy or girl—who had dropped out of school for whatever reason to reenroll in school, if they so desired. This approach was well received, and many adolescent mothers are finally attending school again. Tanzania took several steps to enhance this process by creating classes solely for adolescent mothers and by creating alternative education options that include providing adolescent mothers with knowledge to help them generate income.

In 2021, Tanzania finally expressed official public recognition of COVID-19 as a pandemic and as being present in the country. The government created a COVID-19 technical committee, which produced several recommendations including joining the COVAX global vaccine facility.  Through COVAX, the U.S. government has donated approximately 5 million doses of the COVID-19 vaccine to Tanzania. Since rolling out the campaign in July 2021, Tanzania has been able to vaccinate 12 percent of its targeted population. While the country still has some ways to go, the 12 percent vaccination rate achieved in a relatively short period of time provides a good basis on which to continue to make progress. In her visit to the Wilson Center, she announced that Tanzania is in compliance with all World Health Organization policies and protocols.

4. Strengthening and advancing U.S.-Tanzania relations: Tanzania and the United States have a long-standing relationship since 1961—working well at both bilateral and multilateral levels. There were challenges along the way, but after a discussion between President Samia Suluhu Hassan and U.S. Vice President Kamala Harris, the future of U.S.-Tanzania relations seems to be bright.  Key points of discussion included Tanzania’s 2020-2025 development plan with the United States, a strong global health partnership through USAID projects, the United States President's Emergency Plan for AIDS Relief (PEPFAR), and the President's Malaria Initiative (PMI). They also discussed the path to restoring Tanzania’s participation with high profile programs including the Millennium Challenge Corporation (MCC) and Feed the Future.  Overall, the President’s goal is to build Tanzania’s capacity to the point where a relationship previously characterized by aid will become one focused on trade, investment, and mutual benefit.

5. Eco-tourism and Energy: One of Tanzania’s priorities includes increasing eco-tourism. During her U.S. tour, President H.E. Samia Suluhu Hassan launched The Royal Tour a documentary that introduces Tanzania to the world and highlights the history, culture, natural beauty, and investment potential in Tanzania. The documentary also displays Tanzania’s hidden gems throughout Zanzibar, Dar es Salaam, Mt. Kilimanjaro, and the Serengeti. The documentary premiered in New York and Los Angeles, and has been well received.

As the war in Ukraine continues, the world is looking to reduce its dependence on Russian gas and oil. Tanzania’s oil and gas reserves presents an opportunity for Tanzania to be a source of energy for the rest of the world. Beyond oil and gas, Tanzania also has critical minerals that the world needs to move towards greener energy sources. By 2025, Tanzania plans to have 6,000 megawatts of electric energy from renewable resources including hydro and solar projects. Tanzania is also researching thermal energy and plans to be a big energy producer. The war in Ukraine is also affecting fertilizer supplies, and there is a concern that farmers in Africa will not have the same access to fertilizer as they did in the past. Last season, Tanzanian farmers did not have much fertilizer – and its one fertilizer factory is unable to meet domestic demand. Therefore, Tanzania has taken steps to increase its supply by constructing a factory that is going to produce approximately 2,000 tons of fertilizer while also negotiating with companies that can produce fertilizer using gas byproducts. The goal for the next three to four years is for Tanzania to produce fertilizer for both export and domestic usage. 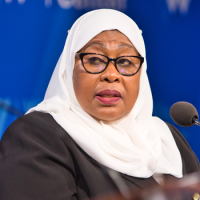 President of the United Republic of Tanzania