Realism in the Arctic

Webcast will appear on this webpage
This event will be webcast
Stream will begin in approximately —:—:—

The United States and Russia disagree on many issues, including the organization of the international system. A “reset” in relations seems unlikely in the near future, but it is imperative to identify areas of cooperation. The Arctic is one.

The Wilson Center's Polar Institute and Kennan Institute hosted a discussion on July 31 on how the Arctic may be an avenue through which the United States and Russia can build cooperative measures. The conversation referenced a recent article authored by two speakers.

“We’ve seen significant geopolitical changes; our relationship with Russia has become more difficult in particular since Russia's violation of Ukrainian sovereignty in 2014 … And then China's interest in playing a role as a self-described near-Arctic nation, which is a category that we don’t believe exists. These geopolitical changes are important too.”

“This is important, real cooperation with a real impact that has to continue. But, with this Arctic exceptionalism and, 'is it possible to completely walk off the region from the challenges that we have with Russia,' I don't know if we can do that completely. I think there’s probably less chance that we would see the beginning of a conflict in the Arctic; there is perhaps more likelihood that if conflict emerged elsewhere it could spread to the Arctic.”

“It's the people who live in the region who are the true stakeholders. I’m sure that people who live in the region don't want decisions made over their heads or discussions to take place without their being able to add their voice to the discussion. I think it's really significant that in the Arctic Council the Permanent Participants sit at the main table and they're not in the background with the observers but they're there at the main table alongside the government. And I think that's proper.”

“We really had hopes, you know, that the Arctic pretty much could be kept out of the broader geopolitical environment. That, unfortunately, has not been proven the case. But, there are still, I would argue and we argue, very strong grounds for agreeing that the situation is not unalterable and that the prospects for cooperation are still very good.”

“The importance of the Arctic to Russia simply cannot be underestimated. 11 percent of its GDP comes from the oil, gas, and minerals there. 22 percent of its exports originate in the Arctic. Russia has a 4,000 km border on the Arctic Ocean, and with the ice melting and the borders becoming more permeable, that obviously is a major concern to them … We have seen, already, the increase in Russian military activity in the Arctic.”

“No matter who wins this election, we’re going to have a lot of involvement and activity in the Arctic. I think the beginning of either a second Trump administration or a first Biden administration opens possibilities for reaching, you know, just a bit.”

“What I would want to see … is to have the Russians explain what their objectives are, which are of concern to us, and for us to explain on our side. And I think this is something that we cannot ignore; we are taking steps too—our air force presence in the Arctic is very strong, very powerful… It just strikes me, as a former diplomat, that by having the military at a high level talk to each other that we might be able—I'm not saying we’re going to solve anything—but at least we’ll get a better understanding of where the other side is coming from.”

“We are experiencing increased political uncertainty in this relationship. At the same time, we see the Arctic stressed by global warming, severe economic downturn, and a global pandemic. This is really a unique trifecta of challenges, placing the Arctic much more centrally on the world stage. So, these challenges call out for international collaboration.”

“One urgent need right now is improving climate forecasting. It’s extremely important for the Arctic itself, and the world. We need clear research findings to offer a sound scientific basis for future political decisions regarding environmental protection, sustainable economic development, and global cooperation about the Arctic.”

“Linkage is a reality—it's a reality of the human experience. To try to, kind of, wall off any space in our relationship entirely from what is going on elsewhere in that relationship may not be realistic. So, what I want to do is try to encourage this panel to think together, to bring all of the issues together, and find a way forward that is neither, 'we have to fix everything in order to make progress anywhere,' nor 'let's pretend we don't have problems.'”

“The more important that the Arctic economy is to Russia, the more incentive U.S. and Western policy makers looking to exert leverage on Russia will have to sanction those things. I view that simply as a statement of fact—it's not an argument that there should be more emphasis on that or there should be less—that we give them a pass in this area—it’s simply a question of incentives… In the current sanctions dynamic we’re in, that’s likely to lead to more conflict and make it harder for us if we want to separate out that Arctic conversation.”

“The Arctic is not going to be the inception of an escalating Russia-West confrontation, but it will be a theater of one.” 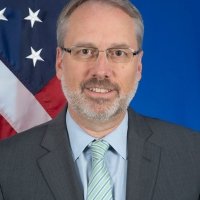 U.S. Coordinator for the Arctic Region, U.S. Department of State