The Honorable Hassan Sheikh Mohamud, President of the Federal Republic of Somalia, delved into both the economic and security challenges facing the country a year into the Federal Government’s tenure.

“It is the duty of my government to prove the skeptics wrong: to lay the foundations for a Federal Republic of Somalia that will be strong, stable, and united, and in which the principles and practices of democracy are realized at all levels of government.”- President Hassan Sheikh Mohamud

Hope for the Future

“I am incredibly proud to represent the congressional district in the United States which is home to the largest Somali-American community in the United States and in North America,” remarked Congressman Keith Ellison. He added that President Mohamud has been able to establish Somalia as a country on the rise and that it is tremendously important to be gathered on this day. President Hassan Sheikh Mohamud expressed the difficulty that came with his position; he inherited a fragmented country where everything has to be done from scratch. Regardless of the scope of Somalia’s challenges, the president remains optimistic. Jane Harman shares Mohamud’s optimism and thinks that because “Somalia has been plagued with instability for years; it is good to [finally] have a conversation about the future.” After one year, some modest progress has been made. A level of normalcy has been restored to Somalia and the population is hopeful about the future. However, many people are befittingly skeptical after decades of turmoil and require some convincing. According to the president, they have earned that right, but the government’s goal is to prove the skeptics wrong by laying the foundations for a new Federal Republic of Somalia that are strong, stable, and united.

The Constitution and the Federal System

It is of c

ardinal importance to complete the Somali constitution in a timely manner. The process of reviewing the provisional document is already underway. However, it will require months of “consultation, negotiation, and compromise to ensure that the new constitution reflects the vision and aspirations of all parts of Somalia,” said the President.  It must then be approved by parliament and submitted to a nationwide referendum.

The second major obstacle to long-term stability in Somalia is the development of the federal system. The boundaries of the member states have to be clearly demarcated. The president also highlighted the fact that, “The process of federation can only succeed if it reflects and respects the will of the local people, not if it is imposed from the capital.” Therefore, the government has taken steps to reach an agreement, such as the one with the Puntland authorities that enshrine a “shared commitment to implement a federal system of governance.” With the help of the Turkish government, there is a continuous dialogue with Somaliland authorities, underscoring the determination to preserve the unity of both the Somali state and nation, “not by force and coercion, but through negotiation, mutual respect, and understanding.” The president stated that “Somali unity must be more than a rhetorical device: it must preserve and promote the dignity, equality, and legitimate aspirations of all Somali citizens.”  By adhering to such principles, the president is confident that the dialogue with Somaliland will not only continue, but will eventually bear fruit. 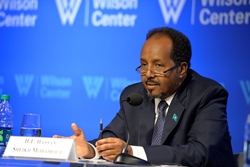 The president also identified the challenge of democratization. In the near term, an independent national electoral commission, as well as the design of a multiparty electoral system will be established. A consultative process will be implemented “in which government, parliament and the commissions complement one another’s efforts to ensure that all voices are heard.”As the target and timeline for vision 2016 unfurl, the need for economic, political, and diplomatic support becomes more apparent. Somalia will be looking to other nations, especially the United States to learn from “[their] long and successful experience of federalism and constitutional government.” The Government has planned 72 districts in Somalia, which will have police stations, courts of law, public schools, and municipalities. The Government also intends to construct public health clinics and teacher training centers.

Another issue that President Mohamud addressed was that of remittances. Estimates place the remittance flow into Somalia at over 1.3 billion USD per year.  In the absence of a formal banking system, the flow of these critical funds is dependent upon money transferring organizations. The scheduled closure, at the end of this month of UK-based accounts held with Barclays Bank, threatens to disrupt, if not destroy, this vital economic link. The president hopes that policy makers, especially in the United Kingdom will strive to find an alternative regarding this matter.

When asked about the terrorist organization, President Mohamud declared that, “Al-Shabaab remains a menace; together we need to reverse it.” He added that it is difficult to prove to the world that some tangible progress has been made, because Al-Shabaab still has a degree of operational capacity. However, at present, there are only two swaths of territory where the group operates unfettered, but the rest of the country is under government control. Congressman Keith Ellison encouraged the president on his education initiative that seeks to “give more chances to children and less to Al-Shabaab.”

The progress made in the first year of the new government was enumerated by the president. Though President Mohamud is confident that Somalia has bright future, he acknowledged the challenges before the country at this pivotal moment in time. He concluded his speech with an invitation, “I challenge those of you in this room to pack some bags and come visit us in Somalia. I guarantee that you will not be disappointed.”

President, The Federal Republic of Somalia