Stuck: Rwandan Youth and the Struggle for Adulthood

Stuck: Rwandan Youth and the Struggle for Adulthood

is the need to ask the following question: ‘How do youth become adults, and what happens if they fail?’”  This was the essential question posed by Marc Sommers in his book Stuck: Rwandan Youth and the Struggle for Adulthood, and it provided the backdrop for a discussion surrounding the hopelessness encountered by Rwandan youth within the broader context of a Rwanda embraced by the international development community while still dealing with tremendous internal challenges.

Moderator Robert E. Gribbin, former U.S. Ambassador to Rwanda, opened the discussion by providing some insight into the subject of scholarship regarding Rwanda.  He recalled that when he first arrived in Rwanda in the 1970s, there was only one book on the country, but that “the tragedy and the trauma of [the genocide], and the effects that resonate still today, have inspired much scrutiny, and study of Rwanda. In fact, it may be the most studied country in Africa.”  He felt that this level of study was a positive development, however, and that “the plethora of publications and the discourse around them contributes positively to better a understanding of contemporary Rwanda, of modern Africa, and even of our own Western societies.”

Marc Sommers then discussed the specific dilemma of housing which confronts Rwandan youth, and is compounded by stern social views and government regulations, tying this phenomenon into a broader contradiction: that “the warm glow that increasingly surrounds Rwanda contrasts sharply with cold realities confronting most of its youths.”  This is reflected by a dichotomy in perceptions of Rwanda,  Sommers remarked because “The dominant literature effusively praises Rwanda as a dynamic model of development… but a second body of publications highlights serious governance and rights challenges confronting Rwanda.”  According to Sommers, a strict value system, especially in rural areas, dictates that a boy cannot become a man until he has built a house and married, and that “failure in housing leads to failed masculinity, which affects male and female youth alike.”  Many young men are unable to assemble sufficient resources, though they have no choice but to try; even when they have accumulated a certain amount of resources, “government regulations on house building and the informal economy directly and negatively impact youths’ lives.”  As a result, “male youth who cannot complete a house face a future of public failure, and they know it.  Their inability to marry leaves most female youth unable to become women.”  He concluded that “The findings in Stuck raise questions about how we think about gender work.  This is because in Rwanda and far beyond, female youth cannot become women until male youth are able to become men.  So, should we direct support to male youth so that male and female youth can both become adults?”

Kathleen Kuehnast of the United States Institute of Peace 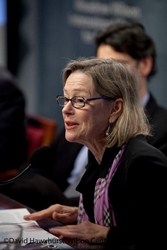 focused her presentation on the fate of those hopeless Rwandan youth in the phase between youth and adulthood.  She said that “in many traditional societies, this zone is the most protected, it is very gender-segregated, and the kinds of rules you must follow to stay safe… are very [entrenched].”  As such, she wondered what will happen to youth who are not protected in this transitional phase by posing the question, “what happens when there are these failed safety zones?”  She predicted that even if youth escape to the city, they have not necessarily escaped the shame of having failed to build a house.  She praised Sommers’ book for “[bringing] men into the conversation of gender.” 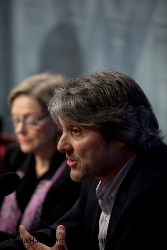 rather than as victims or as dangerous predators easily lured into violence.  He further lauded Sommers’ suggestion that helping young women, in this situation, might mean first helping young men.  Barker addressed some of the issues faced by men who marry, positing that they are often “ashamed to face their family because of not having enough income,” and that “if there is a ‘stuckness’ around youth, it’s not over once they marry and form a household, maybe it goes from being ‘stuck’ to being stressed…  That stress ripples into the family with tremendous implications for the lives of women and certainly for children as well.”  He emphasized that difficulty still lies ahead for those who do succeed in building a home.

All of the panelists highlighted the potential dangers awaiting youth who are unable to transition to adulthood in the way that is traditionally and socially accepted.  There was a uniform concern for the youth who flee to Kigali, hoping to escape their obligations, but who may find themselves worse off in the capital city.  However, the panelists were hopeful that unrestricted research conducted by Sommers in writing Stuck could bring to light a problem often overlooked and misunderstood by the development community, and that the questions raised by the book could help to factor the needs of men into the aid discussion. 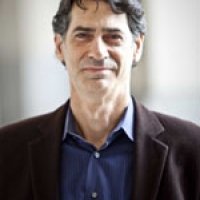 (Ret.), former Ambassador to Rwanda and author of "In the Aftermath of Genocide: The U.S. role in Rwanda"