“The African Union 2012 and Beyond”: The Vision of Chairperson Dr. Nkosazana Dlamini Zuma

“The African Union 2012 and Beyond”: The Vision of Chairperson Dr. Nkosazana Dlamini Zuma

An Eye Toward the Future

The future of Africa is promising. Even though, the continent has made commendable efforts in development; more needs to be done. Hence, African states need to invest and actively work to make Africa the power it ought to be in the world.

In her introductory remarks, Jane Harman, Director, President and CEO of the Wilson Center, recognized the progress made by the African Union and the continent as a whole to “take its rightful place in the global community, already boasting seven of the fastest growing economies in the world and the highest return on investment of any area.” Steve McDonald, Director of the Africa Program and Project on Leadership and Building State Capacity, added that the promotion of regional integration and African trade are “extremely” important issues for the continent. Consequently the Africa Program at the Wilson Center is working closely with the African Union (AU), the UN Economic Commission for Africa, the African Development Bank and the Foundation for Worldwide Cooperation of former Italian Prime Minister Romano Prodi to “encourage international support for increased regional integration and inter-Africa trade.” The Africa Program has also partnered with Manchester Trade “to promote a dialogue for a coordinated and comprehensive economic policy toward Africa,” given that AGOA expires in 2015.

Dr. Nkosazana Dlamini Zuma, the newly elected African Union Commission Chairperson, recognized that Africa is strong but still growing. Fifty years after the independences, Africa is at the point where it needs to reflect and examine what has been done so far; while at the same time think constructively about the next fifty years. However, she mentioned that success over the coming fifty-year period requires the implementation of certain “building blocks” now. Dlamini Zuma stated that Africa ought to make development its chief priority. She also charged that it was important to think of agriculture as an engine for economic growth. Therefore, African governments need to help their farmers, who make up the majority of Africa’s labor force, move away from subsistence agriculture to commercial agriculture. In addition, agricultural development is necessary to achieve food security on the continent. Infrastructure development with regard to energy, transport, and telecommunications are also crucial. 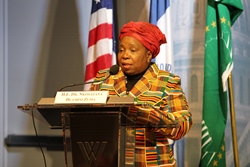 Dlamini Zuma maintained that developing these infrastructures will facilitate cooperation between inland and coastal African countries. The other area that requires close attention and that is critical for development is peace and security. She emphasized that African states must “continue to expand democracy, respect for human rights and good governance.” She saluted the efforts that have been made regarding the situations in Mali and the Democratic Republic of the Congo (DRC) with the M23 rebel movement, and the support that the AU and the UN have provided those countries. But at the same time,  she expressed concerns regarding the current UN peacekeeping missions, particularly that of the DRC. If these missions do not have the mandate to prevent violence, she then quipped “who creates peace where there is no peace so that the UN can keep it?” The empowerment of women is another pertinent area key to Africa’s long-term sustainable development. According to Dlamini Zuma, there can be no development in Africa if women are left out because they represent half of the continent’s population. Among other things, African states should work towards increasing women access to land and finance and encourage their participation in politics. Dlamini Zuma stated that the percentage of women in public employment, “for me it (should be)… 50%, anything less does not match with the demography of the continent.” Dlamini Zuma concluded that “there are infinite possibilities to invest in Africa. In the next fifty years, Africa will be prosperous.”