Skip to main content
Support
Explore More
Close
Event
Rule of Law
Judge Sérgio Moro on “Handling Political Corruption Cases in Brazil”
On July 14, 2016 at 2:00 – 4:00
Share on FacebookShare on TwitterShare via Email
Share
Part of the Democracy and the Rule of Law
Event

On July 6, the Brazil Institute and the Washington College of Law will inaguarte the Rule of Law Lectures Series with Minister Dias Toffoli

With Brazil confronting unprecedented economic and political challenges complicated by investigations and prosecution of large scale corruption involving major political and business actors, the country’s Supreme Federal Tribunal is fulfilling its unique role as a criminal court in addition to its traditional function as a constitutional court.

On July 6th, Minister José Antonio Dias Toffoli, of the Supreme Federal Tribunal (STF), will speak about the evolving role of the court. His presentation, to be followed by discussion with the audience, will inaugurate a new lecture series on the Rule of Law in Brazil jointly sponsored by the Brazil Institute and the Washington College of Law at American University. The series builds on the “The Brazil-United State Judicial Dialogue” of 2011 and the Wilson Center’s Rule of Law Initiative.

Minister Dias Toffoli was named to the STF in 2009 by then President Luiz Inácio Lula da Silva. From 2014 until earlier this year he led the country’s Superior Electoral Tribunal, which supervises elections at all levels in Brazil. Minister Dias Toffoli is scheduled to become President of the Supreme Court in September 2018, according to the tradition of rotating the position amongst the eleven Justices every two years. He is a graduate of the University of São Paulo Law School and former General Counsel of the Workers Party. He held the position of Solicitor General before being appointed to the STF. 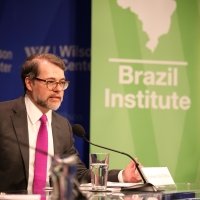