The Future of the Sustainable Development Goals

“As we go forward, we will discover that 2015 was when we really started getting serious about transdisciplinary challenges inherent in sustainable development,” said Melinda Kimble, senior vice president for programs at the UN Foundation, at the Wilson Center on April 13.

Wednesday
3:00pm – 5:00pm ET
Get Directions
This event will be webcast
Stream will begin in approximately —:—:—

“As we go forward, we will discover that 2015 was when we really started getting serious about transdisciplinary challenges inherent in sustainable development,” said Melinda Kimble, senior vice president for programs at the UN Foundation, at the Wilson Center on April 13.

Experts from government, academia, and NGOs met at the Wilson Center to discuss the Sustainable Development Goals (SDGs) and how they can build on the successes and failures of the Millennium Development Goals (MDGs) between now and 2030.

The event was part of the ongoing “Managing Our Planet” series developed by George Mason University and the Wilson Center’s Brazil Institute and Environmental Change and Security Program, which is now in its fifth year.

A key component of the SDGs is the new, more visually understandable agenda of goals and targets. It “is comprehensive and integrated, yet relatable and built upon decades of trying to build a different kind of paradigm around how we approach sustainability and development issues,” said Daniella Ballou-Aares, the senior advisor for development to Secretary of State John Kerry.

Unlike the MDGs, the SDGs are for all countries – developing and developed – showing people “we are all responsible for this transformative and revolutionary foundation we put in place,” said Kimble.

The SDGs also shift the development agenda from a focus on primarily social issues to one that includes social, economic, and environmental elements, and encourage more domestic and private sector investment, said Ballou-Aares.

Finally, the impacts and progress of the SDGs will now be measured through more modern means such as mobile, social, geospatial, and real-time data.

The carefully negotiated 17 goals, 169 targets, and 235 indicators, covering everything from climate change to early childhood development, “help us measure and monitor what we are doing,” said Kimble, and provide for better identification of vulnerable populations.

The panelists identified the connectivity between goals as a key component of the agenda. “You can’t do one goal; every goal leads to another…all the goals can be part of serving the agenda of sustainability and transformational planet management,” said Kimble.

Consider, for example, water. The SDGs include water in both a direct and a more comprehensive and integrated manner than the MDGs, which “focused on taps and toilets,” said Sarah Davidson, manager of water policy at the World Wildlife Fund (WWF). The targets under SDG six, the dedicated water goal, include things from drinking water availability and sanitation to quality and broader water-related ecosystem health. Efforts to achieve each of these targets are necessary to achieving the overarching water goals. “We won’t get to that ultimate water goal of enjoying availability and sustainable management of water and sanitation for all until we address every single one of those targets, and none of those can be addressed independently,” she said. “They really all do have to be thought of as a comprehensive set.”

“You have more of a starting point, certainly, than you did with the MDGs”

Tools like WWF’s basin report cards take into account water basin conditions, interactions, and goals, with the intention of spurring leaders and the public to think about to environmental conservation and development as a whole. “There is a growing need, that will only grow stronger as we move further in this, to synthesize really complex information to help decision-makers decide what to fund, how to prioritize, where to act,” said Davidson.

Sexual and reproductive health and rights is another issue that cuts across the agenda. “Decades of evidence demonstrate that fulfilling the unmet need for information, counseling, and services for sexual and reproductive health for adolescents, men, and women is a really key strategy in helping to achieve a whole range of social, economic, and environmental goals,” said Sneha Barot, a senior public policy associate at the Guttmacher Institute.

The health and gender equality goals within the SDGs indicate a “move towards more rights-based ways of measuring these issues,” said Barot, but the lack of direct attention to sexual rights reflects the controversial nature of the topic.

The SDGs align with the international climate change agenda as well, said Eliza Northrop, an associate in the International Climate Initiative at the World Resources Institute. WRI collected data from the climate commitments of 94 countries and found they aligned with the objectives of 147 different SDG targets. Initiatives to improve energy, education, and resilience in Niger, Ethiopia, and India, for example, can lead to co-benefits for development and climate change action, she said.

The intermingling of SDGs may prompt more coordination among stakeholders than what was seen with the MDGs. “We are at the starting point, if successful, of building a movement and a set of common objectives that many can see themselves in,” said Ballou-Aares. Success “requires many, many actors to work differently; this is not a top-down agenda.”

The development of a “global brand movement” at the launch of the SDGs was essential, said Ballou-Aares, as “everyone from Malala, to the Pope, to media stars” was discussing the goals and engaging their followers. “You’d still say there’s a long way to go for everyone to know what the goals are and what they mean, but you have more of a starting point, certainly, than you did with the MDGs or many other similar efforts.”

Cletus Springer, director of the Department of Sustainable Development at the Organization of American States, said past agreements on sustainability were “largely documents on paper” and produced few tangible impacts. In order to achieve the new goals, we must understand why past efforts were not been realized, he said.

“Prosperity is working against the wellbeing of people and the planet and there’s not sufficient partnership to reverse that change,” Springer said. “If the SDGs are going to be attained, that dynamic has to change and it has to change fundamentally.” The human rights component of the SDGs is a “useful prism” to judge progress, he said. “If these goals do not reinforce the rights of people, if they diminish those rights, then the goals are meaningless.”

“There is significant potential for synergies and benefits to be realized; they are not going to be automatic though,” said Northrop. Leaders must “make sure promises aren’t just words but are action,” said Barot. Civil society will play an important role in holding governments accountable in implementation, financing, and data and information collection and dissemination.

Planning and funding of development programs should be adapted to not only keep in mind integration across SDGs, but a variety of stakeholders. The increase in private and domestic development investment since the MDGs “suggests how diverse the actors you need at the table to have the resources,” said Ballou-Aares, and provides “a promising picture that there are more resources in the world.”

There are “a lot of entry points and opportunities to continue to raise visibility and push ourselves and others for action,” said Ballou-Aares. Kicking off implementation will be the United Nations High Level Political Forum this July, where initial strategies for 25 countries will be reviewed in the context of national development plans. “This will be the first chance we have to see how this new streamlined, focused agenda can make a great difference in transforming the world and ensuring a sustainable future,” said Kimble. 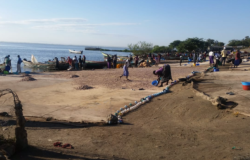