The Security Demographic: Population and Civil Conflict After the Cold War

Do trends in human population affect a country's chances of civil war? According to a new report from Population Action International, countries with a high number of young adults were more likely to suffer a civil conflict during the 1990s.

Do trends in human population affect a country's chances of civil war? According to a new report from Population Action International (PAI), countries with a high number of young adults (at least 40% of the adult population between the ages of 15 and 29) were 2.3 times more likely to suffer a civil conflict during the 1990s. PAI, a policy advocacy group working to increase awareness and support of international family planning and reproductive health programs, also found that rapidly growing cities, scarcities of cropland and water, and HIV/AIDS may contribute significantly to the risk of deadly civil violence.

"Population growth exacerbates the problems of poverty and insecurity. Security is, of course, what we are all concerned about today," said PAI Council Member and former Director of the United Nations Development Programme William H. Draper III, welcoming the audience to the Wilson Center for the launch of The Security Demographic. In addition to Dr. Richard P. Cincotta and Robert Engelman, the report's authors, the program featured Lt. General Claudia J. Kennedy (USA Ret.), formerly the Deputy Chief of Staff for Intelligence for the U.S. Army, and Major General William Nash (USA Ret.), currently the director of the Council on Foreign Relations' Center for Preventive Action.

The Security Demographic examines the correlations between population and conflict after the cold war, using newly updated and expanded data from the United Nations Population Division and the Uppsala Conflict Data Program to solve a demographic puzzle: do the dynamics of human population—rates of growth, age structure, distribution—affect when and where warfare will break out? According to Cincotta and Engelman, the answer lies in the complex interplay of a country's birth and death rates as it undergoes what they call the "demographic transition." 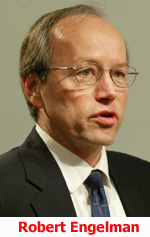 Engelman noted that he was "not claiming in this work that demography is destiny…population does not kill people, to borrow a phrase, people kill people." He continued, "Population growth is not an inevitable force in human affairs; we can address it," observing that the "report offers a powerfully positive message: the entire world is moving through the demographic transition." Engelman advocated international development policies that would ensure that lower birth rates, rather than higher death rates, are the primary reason for slowing population growth, and he closed by spotlighting one of report's recommendations:

Attend to the status, the needs and the ambitions of girls and women worldwide. The evidence is overwhelming: when societies assure that girls are in school, when women who want to work have opportunities to work, and all people have access to the family planning and related reproductive health services that they seek, both birth rates and death rates fall. There are lots of reasons to pursue these policies. We believe that today we can add a new one: they contribute to a safer world for us all.

Of the remaining factors, Cincotta and Engelman found that the "youth bulge" (a high proportion of young adults) was most closely associated with the likelihood of a new outbreak of civil conflict. By itself, urbanization was a less powerful force, and lack of cropland and fresh water proved to be only weakly associated with conflict. But when coupled with a large youth bulge, countries with high levels of urbanization and scarce resources had a 40% probability of experiencing an outbreak of civil conflict during the 1990s. Despite their intuition, the researchers did not find a correlation between the effects of HIV/AIDS and civil violence. Cincotta hypothesized that while there is not enough demographic evidence to prove it now, some countries' high death rate from HIV/AIDS will create an extreme youth bulge that will lead to future political volatility.

Illustrating his points with charts from The Security Demographic, Cincotta connected the youth bulge's characteristic demographic profile to the onset of civil conflict in Colombia in 1971, Sri Lanka in 1985, Rwanda and Somalia in 1990, and Iraq today. Mapping the risk factors across the globe, he identified areas of high risk in Africa, the Middle East, South Asia and the Pacific Islands, noting that the country-level data did not identify areas of subnational conflict, like that currently gripping India and Russia. Based on their profiles, Cincotta sees "glimmers of demographic hope" in the Islamic crescent, along with bright spots in Southeast Asia, the Caribbean and South America.

Like Engelman, Cincotta believes that foreign assistance programs that encourage progress through the demographic transition are part of the "soft power" the United States can use to improve security. "At PAI, we believe that if policymakers more fully understand the demographic transition, and if they can grasp the strategic implications of what we call the security demographic, those who drive our foreign policies could grow to appreciate just how powerful focused ‘soft power' actually can be." 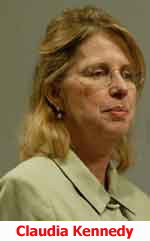 General Kennedy, the first and only woman in the U.S. Army to reach the rank of three-star general, agreed, saying that if the military views conflict as a product of insecurity and deprivation, rather than the result of inherent aggression, "all sorts of actions can be taken" to reduce violence. She noted that "it's important to say that investing in family planning, in girls' education and encouraging economic development and opportunity for women is not just one of those ideals that comes out of the milk of human kindness…it's good for all of us." Praising the report as "a great service to mankind," Kennedy said, "Mere understanding of the security demographic will go a long way to helping the United States set some priorities that make sense for our long-term good."

General William Nash, who served as Regional Administrator for the United Nations in Southern Kosovo, contrasted traditional "targeted" prevention, which is aimed at specific, near-term conflicts, with methods that address poverty, population and health issues to reach the sources of conflict. Calling it "my life's work," Nash declared that understanding the demographic transition is "absolutely critical" to a global systemic approach to conflict prevention.

PAI plans to distribute the report to top policymakers in the army, submit the findings to policy journals, and possibly publish an expanded version as a book.