What are the implications and consequences of the U.S. withdrawal from Syria? How will it impact key regional players – Turkey, Iran, Russia, the Syrian Kurds, the Islamic State and other jihadi groups, and Israel? What does it say about the process and substance of U.S. decision-making and priorities in a turbulent region? Veteran analysts of Middle East politics and practitioners of U.S. policy addressed these and related questions.

On December 19, President Trump announced his intention to withdraw U.S. forces from Syria. Despite considerable confusion over the timing and conditions of the drawdown, U.S. military equipment began leaving the country last week.

What are the implications and consequences of this decision? How will it impact key regional players – Turkey, Iran, Russia, the Syrian Kurds, the Islamic State and other jihadi groups, and Israel? What does it say about the process and substance of U.S. decision-making and priorities in a turbulent region?

Veteran analysts of Middle East politics and practitioners of U.S. policy addressed these and related questions.

"The absence of process and the absence of a strategy are just lethal to U.S. interests. A defensible strategy is 'We’re leaving the region,' but I don’t know that that’s our strategy either. I think that the reaction that Trump took was, by all accounts, impulsive.”

“I believe, not just with respect to Syria, that at times we kind of resemble a modern-day Gulliver, wandering around in the Middle East tied up by smaller and larger powers whose interests aren’t our own, and tied up by our own illusions.”

“We have now sort of weighed in on one particular side, which is the YPG side – the Syrian Kurd side. We have to think how deeply involved we want to get enmeshed in that kind of thing. You cannot have troops on the ground working with these local authorities that the Americans helped to set up without then taking sides in an ethnic dispute. That ethnic dispute is actually helping ISIS recruit.”

“The reality is that there will be no real stability in Syria until the Syrian government sends its forces back in, whenever that is, and re-establishes some kind of gradual authority over that area. Otherwise, it’s going to be constantly jockeying between Turkey, the Syrian government, the Syrian-Kurdish independence advocates, and Arabs who resent that kind of Kurdish separatism.”

“Manbij should have been a showcase of how stability comes back and ISIS can be contained and defeated, and it’s not. We’ve tried to stabilize and make political efforts for two and a half years, but these ethnic tensions that I’ve talked about [and] the economic grievances... will always give ISIS a recruiting base. Soldiers cannot fix that.”

“For me, the bottom line is that yes, you can make a serious case for a conditional, carefully planned, and carefully articulated U.S. withdrawal, but the version that we’ve seen playing out before us now is the opposite of that. I think it is diplomatic malpractice that will have real repercussions that go even beyond Syria.”

“In a functional administration, all of these processes would have taken place before John Bolton’s trip to the region... [U.S. withdrawal could be] a legitimate conclusion, but I think it could have only been done so after negotiations with the regime, arrangements with Turkey, and further progress in the fight.”

“I think we should be honest about our limited ability to reduce Iranian influence in Syria, which is high, which was there before the civil war started, but that has even grown since. While a problem, it’s not something we can really limit with just 2,000 troops in the northeastern part of the country.”

“The U.S. disengagement from Syria does create a kind of scramble for the northeast of Syria. I think that’s inevitable, and I think that benefits ISIS, which is why the bombing on Tuesday was kind of interesting and puzzling for rational analysis: why would ISIS do something that might drag the U.S. back into Syria? I guess this was probably an opportunistic attack, and clearly, ISIS decided that they can either accept that risk of the U.S. staying, or that it doesn’t care, maybe because it sees the war and the jihad going on.”

“Attaching [the removal of Iranian influence from Syria] as a goal to the deployment, especially because it was not achievable, for me was very problematic, and frankly, very dangerous for U.S. credibility, and sent a message regionally. I never accepted it was a good idea, and still don’t, for us to set a goal we ourselves knew, and everyone around us knew, was impossible, and tied it to a military deployment in a hostile environment.”

“We must think, ‘Does the current leadership care enough to see through the project and take on the cost? Is it a priority? Do they function well enough procedurally to pull off something so complicated?’ To me, the answer is no, and for that reason I cannot imagine realistically a way through this other than disengagement.”

“Trump’s decision to withdraw came at the peak of Turkish threats to launch an invasion at any minute, so we really were about to have some kind of really, really bizarre and potentially dangerous situation, where Turkey would have been invading this area and clashing with U.S. troops.”

“The policy of staying until there is a settlement which covers the whole of Syria, protects Kurdish rights, and prevents Iran from coming into the area, was on paper a very good goal, but it isn’t feasible under the current situation. The regime is winning everywhere else, it’s never made concessions – concessions aren’t in its DNA – and there was no political settlement on the horizon. So what we were looking at before Trump decided to withdraw was a scenario where U.S. troops were going to be indefinitely deployed in an area where people were growing increasingly unhappy at the government they’re getting.”

“Unless America is prepared to fight an ongoing and endless war in a part of Syria where the partners and allies it has are disliked by every other regional player and many of the local residents – I don’t think America was prepared for that. On the other hand, just announcing that you are walking out is also a recipe for some kind of new conflict in the area that could bring god-knows-who fighting into the area.” 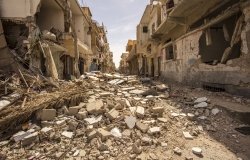