Tunisia and the Arab Malaise

Tunisia and the Arab Malaise

Recent events in Tunisia have given rise to speculation about whether or not the country's popular uprising will serve as an example to other Arab nations. Alan Goulty, former British Ambassador to the Republic of Tunisia, and David Ottaway, former Bureau Chief for the Washington Post in Cairo, shed light on the complex situation in Tunisia and spoke to the effects it may have on the region.

Goulty addressed three overarching questions about the Tunisian revolution: first, why did Western observers fail to predict this uprising? Second, why have Western attempts at democratization in Tunisia been so ineffective? And third, what is the general outlook for Tunisia and the region?

According to Goulty, Western analysts had long known about the increasingly repressive environment in Tunisia and the growing corruption of President Zine el-Abidine Ben Ali and his family. Still, they failed to predict this revolution in part because Tunisia enjoyed positive annual growth under Ben Ali and seemed relatively stable compared to some of its neighbors. He noted that Tunisian authorities failed to foresee the uprising, likely because many considered the Islamist threat more immediate than the possibility of growing popular discontent, and press restrictions silenced any warning signs.

According to Goulty, several factors contributed to the inability of the West to democratize Tunisia, including a general lack of interest in Tunisia. He also identified a reluctance to "rock the boat" to protect Western commercial interests in the country and out of fear that alternatives to the current regime, such as weak opposition movements or Islamist parties, would have been worse. Goulty predicted a number of difficulties Tunisians must overcome in the wake of their revolution. Employment, tourism, and credit will suffer, according to Goulty, and economic recovery will depend on domestic and foreign investor confidence in this country as safe for investments. 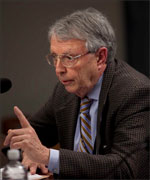 Ottaway spoke to the impact of the Tunisian revolution on other Arab countries. Already, about one dozen instances of self-immolation and a wave of riots have swept the region, including those currently taking place in Cairo. The Tunisian example has also affected government leaders, many of whom have made statements regarding the likelihood of their own countries following Tunisia's lead.

According to Ottaway, the revolution raises a number of questions, including one about the role of cyberspace in popular uprisings. While acknowledging its impact on Tunisia's revolution, he noted a gap between cyberspace and the street. He also spoke about pro-democracy and human rights groups, which contributed to the uprising but still have shallow roots in the region.

Ottaway urged caution in speculating about countries which may follow Tunisia's lead. He listed Egypt, Yemen, and the Sudan as nations which may be ripe for a popular uprising but emphasized the importance of taking into account the specifics of any given country before making predictions. By way of example, Ottaway noted that Egypt has a restrictive political climate, a massive police and security apparatus loyal to the president, and a long history of markedly apolitical citizens. Such specific concerns must be taken into account when assessing the impact of Tunisia on recent demonstrations in Egypt and when speculating about future developments.