The relentless violence that besets many cities around the world prompts local responses in the neighborhoods and broader communities. Those responses can comprise what we call resilience. Elements of positive resilience can include an array of protective measures, some of which are organized by the communities alone, some with city or state officials, some with outside organizations like NGOs or development agencies.

A new study on the intersection of violence and economic development in cities breaks new ground by examining how communities respond to and cope with extant violence, rather than focusing on the root causes of violence in a given area. Authors Diane Davis, Harvard professor of urbanism and development, and John Tirman, executive director of MIT’s Center for International Studies, spoke at length about the origins, methodology, and findings of the report, Urban Resilience in Situations of Chronic Conflict, at theWilson Center on July 12. The report was supported by USAID’s Office of Conflict Management and Mitigation.

“We made the decision that we weren’t going to produce yet another research project or study on the root causes of violence, because there is a lot of incredibly good work on that [already],” said Davis. “We wanted to take a totally different angle…to try to think about taking a more pragmatic approach that builds on how everyday people, who live with violence, respond.”

To do this, Davis and Tirman focused their research on seven cities around the world with histories of chronic violence, creating a case study for each and then comparing results. (An eighth city, Karachi, was jettisoned because it was deemed too unsafe for research.) The comparative process allowed Davis and Tirman to develop a basic theoretical framework for how different factors increase or decrease a community’s resilience to violence.

The term “resilience” lies at the heart of the new study. “The idea of ‘bouncing back,’ or returning to normalcy, is [generally] the measurement standard for looking at resilience,” Davis said.

However, she was quick to point out the problems with such a simplistic definition. “[In] cities of the developing world…things are in flux. So it’s really hard to know what a ‘bouncing back’ is if things are constantly changing."

“Also,” she added, “in many of the environments we were looking at, violence is a consequence of the way things were under normal conditions. So you don’t necessarily want to bounce back to those conditions that were producing the violence in the first place.” 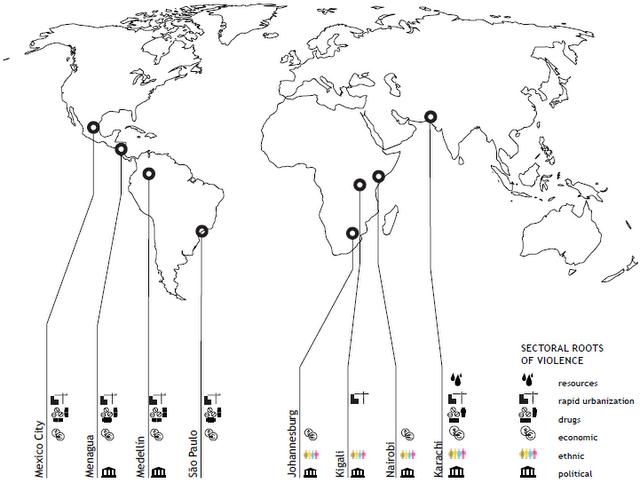 Davis and Tirman sidestepped these problems by letting their research define successful resilience, rather than trying to fit their results to a prefabricated definition of the word. In doing so, they were able to identify several important commonalities in the cities and communities that displayed the most positive resilience to violence.

“Our findings suggest that resilience appears at the interface of civilian and state action,” Davis writes in the report. She underscored the significance of civilians as facilitators in both developing and implementing better security policies: “People who live in violence know more than academics or policymakers about what they can and can’t do to deal with the problem of violence,” she said.

Davis and Tirman pointed out that the most successfully resilient cities they studied – Mexico City, Managua, and especially Medellín – seemed to have a number of civilian/state relationships defined “from below,” rather than the more problematic “top down” approach. This means that civilians and communities were participating on their own terms, collaborating with city planners and with law enforcement agencies to get their needs met rather than simply being what Davis called “yes men” to higher authorities.

Physical space – what Davis referred to as “the weight of the spatial” – also played a very significant role inUrban Resilience. She and Tirman made the conscious decision to incorporate physical planning and design into their research, eschewing the more typical sectoral approach to violence and security.

This methodological break from the existing literature was particularly useful in demonstrating that violence-plagued communities are often themselves the most important agents of resilience. “Citizens have to be able to make real decisions on their own,” Davis stressed in the Q&A session that followed her and Tirman’s presentation. “[They] have to feel that ownership, that autonomy of the decisions in their neighborhood, even if they’re bad [decisions], because that’s what ties them to each other.”

“We think the starting point for generating resilience is really supporting and enabling communities to make dense horizontal relationships with others in their neighborhood, across sectors, that allow them to push back against perpetrators of violence.”

In other words, while the state can play a significant role in helping communities to mitigate violence, successful resilience ultimately requires the commitment and participation of the communities in question.

“The state might have a security program, it might have a planning program, but every decision has to be made with an understanding of what’s good for that particular neighborhood,” Davis said.

Davis was very succinct in offering recommendations based on the study. For policymakers and urban planners, she said resilience is formed by “a combination of good governance, security reform, and…inclusive urban planning.” Citing examples from Mexico City, Medellín, and elsewhere, Davis pointed to planning policies like mixed land use, greater pedestrian accessibility, and more parks and public spaces as ways that authorities could engender the kind of community pride so crucial to the development of positive urban resilience.

“[Focus on] generating vibrant public areas where people feel invested in protecting [them] and making them better,” she advised.

While many scholars have tended to look either at the state or local communities in isolation when considering violence and resilience, Davis argued that reducing violence was “a shared objective.” She thus stressed the importance of “co-production of security,” reiterating the overall notion that state and community actors need to work side-by-side in a form of what Davis and Tirman called “cooperative autonomy.”