During the U.S.-Mexico High-Level Security Dialogue in October 2021, the United States and Mexico established the U.S.-Mexico Bicentennial Framework for Security, Public Health, and Safe Communities, a new comprehensive security plan to replace the 13-year-old Merida Initiative. In doing so, the two nations pledged to address the underlying causes of violence and drug addiction, prevent transborder crime, pursue criminal networks.  The Framework also commits both countries to take action to monitor port smuggling of precursor chemicals used to produce fentanyl and other similar drugs that have fueled over 100,000 overdose deaths in the United States.

On October 13, delegations led by U.S. Secretary of State Antony Blinken and Mexican Foreign Secretary Marcelo Ebrard, met in Washington to discuss the implementation of the Bicentennial Framework. The Biden Administration has focused its efforts on a public health-based approach to reduce drug use and prevent illicit drugs from entering the United States by dismantling clandestine drug laboratories, combatting human smuggling, and regulating precursor chemicals. The Mexican government continues to press its U.S. counterparts to limit the illicit flow of weapons into Mexico, as homicides reached record levels, with over 35,000 in each of the last four years.

To discuss the results of the High-Level Security Dialogue meeting, the implementation of the Bicentennial Framework goals and objectives to address the synthetic drug challenge, and the future of security cooperation between the United States and Mexico, please join the Wilson Center and the Mexico Institute for a conversation with Assistant Secretary of State for the Bureau of International Narcotics and Law Enforcement Affairs (INL), Todd. D. Robinson on October 31st at10:00am.

MexicoSecurity and Rule of Law 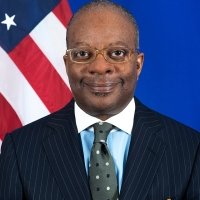