In the first half of last year, 26,000 unaccompanied children were apprehended by U.S. law enforcement trying to cross the southern border. Most came from Central American states like El Salvador, Guatemala, and Honduras. Such displacement is just the tip of the iceberg in terms of migration in the region. Many more are moving from rural to urban areas and into neighboring countries seeking opportunity and fleeing violence.

In the first half of last year, 26,000 unaccompanied children were apprehended by U.S. law enforcement trying to cross the southern border. Most came from Central American states like El Salvador, Guatemala, and Honduras. Such displacement is just the tip of the iceberg in terms of migration in the region. Many more are moving from rural to urban areas and into neighboring countries seeking opportunity and fleeing violence.

This mobility is a result of “social disorganization” across the region, said Eric Olson, associate director of the Latin American Program and senior advisor to the Mexico Institute at the Wilson Center on January 25. “Social disorganization occurs in communities where there is really little social fabric, little community structure, and where the community has little capacity to be resilient.”

Central America has suffered from a long history of corruption and exploitation by state authorities, poor law enforcement, and entrenched criminal networks. But increasingly, environmental factors are also playing a role in disrupting livelihoods, said a panel of experts, including Eduardo Stein, former vice-president of Guatemala, and Herman Rosa, the former minister of the environment for El Salvador.

Contrary to popular belief, the state does function in Guatemala, “but in favor of a chosen few,” Stein said. “It has failed to provide the services the constitution mandates to all of the people,” particularly ensuring equitable access to water and other natural resources.

Water is managed by the central government as a strategic resource, Stein said. This leaves communities with little say in management decisions and has made it easier for corporate actors and powerful landowners to take more than their fair share. Conflicts that arise, such as when villagers move from drylands to water-rich areas, are “not properly dealt with in the short term and in an all-encompassing way.”

“The government is not a passive actor in these contexts,” said David Reed, senior policy advisor at the World Wildlife Fund. “Assets are being distributed unequally and unfairly, very often privileging the economic elites and the more privileged ethnic and cultural groups in society much to the prejudice of the more vulnerable sectors of society.”

“The government is not a passive actor in these contexts”

Combined with the effects of climate change, this insecurity has contributed substantially to violent conflict and a wave of migration as traditional livelihoods become more difficult, Stein said. The region has seen more severe weather events, like hurricanes, tornadoes, and flash floods, and is also faced with soil degradation, water scarcity, loss of arable land, and drought.

In 2015, about 3.5 million people needed humanitarian assistance due to a region-wide drought, and three events in El Salvador from 2009 to 2011 cost an estimated six percent of GDP, Herman Rosa said.

Rosa said he has been advocating for a “landscape restoration” approach to address soil degradation and the loss of arable land. A national program for El Salvador would focus on reforestation and flood management for small farmers in particular. Rosa said such efforts have already begun on a small scale and farmers are seeing the results with smaller losses after extreme weather events.

Governments’ inability to enforce the law, whether in the realm of natural resources or elsewhere, is a major force that drives insecurity in Central America, said Olson. The state often has “limited capacity…to be present and do its legitimate job protecting citizens, fighting crime, and holding people accountable.”

Land use laws and urban planning rules go unenforced, Olson said, and high rural-to-urban migration has led to impromptu communities along hills, riverbeds, and other vulnerable areas. Without enforcement and regulation of these areas, exposure to hazards is high, access to state services is low, and the result is social disorganization.

When individuals stand up to defend their own interests, they are often faced with violence in return. Lisa Haugaard, executive director of the Latin America Working Group, a non-profit activist organization based in Washington, DC, said about three-quarters of the environmental defenders killed globally in 2014 were in Central and South America.

Many, like Goldman Prize winner Berta Cáceres, killed by gunmen in Honduras in 2016, hail from rural indigenous groups fighting development on what they see as their ancestral lands, like dam building, mining, and oil and gas extraction. Sixty-seven of the 185 documented defenders killed in 2015 were indigenous persons or women, groups especially vulnerable because of unclear land titles and gender-based violence, said Haugaard. Reporters who cover stories about corruption and resource extraction are also at risk.

Some governments have not only failed to protect environmental activists but contributed to the problem by criminalizing protests, employing police and military personnel to repress opposition, and expanding anti-terrorism laws to include legitimate dissent, Haugaard said.

A “web of corruption” links government and business interests and perpetuates the violence against environmental defenders, Haugaard said. She urged change in state decision-making processes to include greater participation from local communities and less impunity for violence. “If people are heard, they do not have to risk their lives,” she said.

Policymakers must understand current levels of violence and displacement as a “complex phenomenon” motivated by multiple factors, said Olson.

“If people are heard, they do not have to risk their lives”

Rosa called the inability to link the environment with security problems a “global policy failure.” Management of natural resources “tends to be seen as a very specialized area,” instead of something critical to good governance, equitable development, and stability. Governments should take an integrated approach, he said, including environmental components in a “very central way” with social and economic goals.

In addition, policymakers often struggle to bridge the gap between short-term crisis response and addressing longer term underlying trends. Politicians around the world tend to focus on producing noticeable differences in their four or five years in office. But this is especially true in Central America, where many parties only expect to be in power for one term, Stein said. Long-term projects, like responding to climate change, strengthening institutions, and building norms, tend to fall by the wayside.

“We know temperatures are rising, we know sea level rise is occurring. But for politicians, even when they understand slow onset events…by definition you have a short-term perspective,” Rosa said. “When those impacts will really appear in a serious way, [they] will be dead – physically, and definitely politically.” 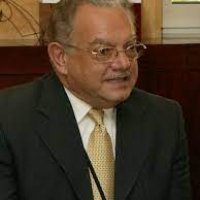 Joint Special Representative for Venezuelan Refugees and Migrants, UNHCR-IOM, and former Vice President of the Republic of Guatemala