Drawing on literature and interviews with young men in Botswana, Nigeria, South Africa, and Uganda, a new World Bank report co-authored by Gary Barker examines the construction of masculinity in sub-Saharan Africa and its links to HIV/AIDS, conflict, and violence, including gender-based violence.

"There is a crisis of manhood in Africa," claimed Instituto Promundo Executive Director Gary Barker at an April 3, 2006, event co-sponsored by the Environmental Change and Security Program and the Africa Program. But little gender-based research focuses on the challenges facing men and young boys. Drawing on literature and interviews with young men in Botswana, Nigeria, South Africa, and Uganda, a new World Bank report co-authored by Barker attempts to bridge this gap by examining the construction of masculinity in sub-Saharan Africa and its links to HIV/AIDS, conflict, and violence, including gender-based violence.

While many gender-based reports focus on the power relationships between men and women, "Young Men and the Construction of Masculinity in Sub-Saharan Africa: Implications for HIV/AIDS, Conflict, and Violence" examines the power dimensions between men to show how "gender rigidities bring with them gender-specific ways of addressing the challenge of coming to adulthood." Barker cautioned that masculinity should not be oversimplified: "It is important to say that there is no single sub-Saharan African young man; and there is no single version of masculinity in the sub-Saharan African setting."

Defining the parameters of manhood is similarly complex: "It's not just looking at the pluralities of individual men—to say that some are tall, and some are short, and some have more sexual encounters than others, that some are from one part of the country and some are from others—but to say that there are different versions of manhood vying for power," said Barker. A wide array of variables—age, ethnic tensions, urban and rural hierarchies, weaknesses and strengths of the state and civil society, poverty and demographic pressures—factor into its construction.

For a boy to transition to manhood he must acquire certain accepted values, skills, or attributes that define what it means to be a "man." The crisis, in Barker's opinion, is the result of an inability by many sub-Saharan African boys to achieve the socially recognized version of manhood. Due to the overwhelming number of youth, work is hard to find, so a key element of what it means to be a man—employment—is not available throughout much of Africa. For example, a 39-year-old male Barker interviewed had "just began to call himself a man because he had secured a civil service job. He had been together with a woman already and they had one child, but he wasn't sanctioned to get married until he had gainful employment."

Rites of passage—such as circumcision rituals—also play a large role in defining masculinity in Africa. In Uganda, Barker noted, boys are circumcised in public, after which they complete their transition to manhood by having "live" sex with a woman—that is, sex without a condom. In addition, Ugandan boys are not considered men if they are circumcised under anesthesia. Similarly, shouting out in pain during a public circumcision can prevent a boy from being accepted as a man. Barker recalled a section from Nelson Mandela's autobiography, in which he "talks about the circumcision ritual he went through, and how he thought he wasn't quite a man because he waited too long before yelling out ‘I am a man,' and that he hesitated for too many seconds while ‘real men' said it immediately and didn't even have to gasp for pain."

Implications for HIV/AIDS, Conflict, and Violence

Rituals and ceremonies of manhood, Barker said, have profound implications for violence and HIV/AIDS. As traditional signs of manhood—gainful employment, land, bride price—become harder to acquire, males are becoming "men" at an older age. A man circumcised later in life likely has a more extensive sexual history that his "live sex" partner, thus potentially exposing her to HIV/AIDS. Even in areas where the prevailing religion promotes abstinence until marriage, "there is pressure for men to have sex to prove manhood," Barker said. "We've got to think that sexual activity for men…while being about pleasure and about fertility, it's also about socially defining yourself as a man."

The African concept of the "Big Man," Barker noted, can greatly impact the socialization of young men. Traditionally, the Big Man—the eldest man in a local area—acts as the father figure, controlling certain measures of masculinity, such as when a man can marry. But the Big Man can also be a dictator, and "armed groups can become surrogate families" that recruit men and young boys frustrated by their inability to achieve manhood, said Barker. "Carrying an AK-47 is a tremendous way for a [young boy] to immediately acquire a degree of power…and jump from being a boy into being a man."

Armed groups use many techniques, such as the manipulation of traditional rites of passage, as well as the use of drugs, threats, coercion, and propaganda, to socialize men and young boys into conflict. "If you look at the ways that boys and young men have been engaged in conflict in the region, it is a very deliberate attempt to encourage and sometimes force and coerce boys and men to use the worst forms of violence," Barker pointed out.

Men can also "reinforce" their manhood by perpetrating violence against women. For example, Barker noted that in some African societies a man can control a woman by using violence if she does not clean the house or take care of the children to his liking. In addition, young girls and women sometimes see violence against them as an expression of a man's love and affection. Yet, he said that men are beginning to address gender-based violence through "kinship groups" that allow men to openly discuss their thoughts before acting on them.

While hegemonic versions of manhood prevail in sub-Saharan Africa, Barker said that some "voices of resistance" make it possible for men and women to speak out against prevailing archetypes, especially in areas where ethnic tensions and gender-based violence are common. "In a setting where up to a quarter of adults are HIV-positive and where funerals of persons dying from AIDS are a weekend occurrence, you do see some men saying ‘there's something going on here that we need to start questioning.'" Similarly, Barker said, some communities that have experienced periods of extreme conflict are beginning to question the traditional association of manhood with weapons.

Some small-scale programs in a few countries are providing a "safe space" for men to question traditional notions of manhood and promote alternative views. While there are no evaluations of their impact yet, Barker said young men in these programs are "showing a very civic-minded version of what a man should be and what a man should contribute to society." Labor unions and faith-based organizations, he believes, could provide an effective arena for integrating some of the approaches used in these small-scale interventions.

Barker recommended engaging male policymakers in open discussion about the negative consequences of traditional views of manhood. Also, development programs and policymakers should pay less attention to buzz words like "gender mainstreaming" and instead explore why men act the way they do: "Looking at gender as relational is a first step." And understanding masculinity, he stressed, requires unpacking stereotypes of men as violent troublemakers: "I think we have a tendency to stigmatize and blame urban-based young men rather than understand these systems that are producing social exclusion."

Examining the way men interact with each other may also lead to a better understanding of male-female relations. But one attendee argued that it may be more effective to educate and empower women: "Is it worth the effort to get men over to your side? Or is it worth just investing in girls?" Barker agreed that empowering and educating girls and women are fundamental steps toward ending gender-based violence and oppression. Yet, he said, "I think there is some lingering aspect that simply empowering women will not bring all the men along, at least not at the speed we'd like to see." One goal of his research, he said, is to bring new dialogues to the gender debate. "At the very least I think we need to get more sophisticated about how we think about this issue of gender." 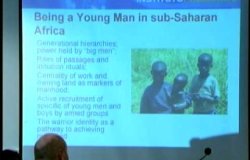 Event
Conflict Resolution and Peacebuilding
Book Discussion: The Other Half of Gender: Men's Issues in Development
On Monday, October 23, 2006 at 12:00 – 2:00 ET