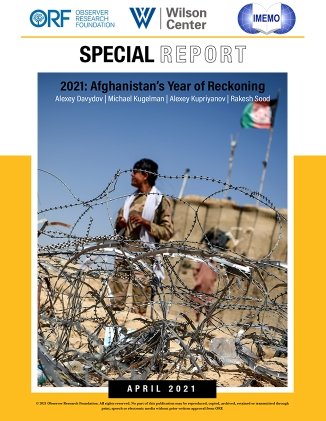 This joint report on Afghanistan – led by scholars from the Observer Research Foundation (ORF), Wilson Centre (WC), and Primakov Institute of World Economy and International Relations – is a crystallisation of some of the efforts of the three organisations engaged in an India-Russia-U.S. trilateral Track II dialogue for the past couple of years.

The aim of these deliberations is to foster a frank exchange of ideas on areas of mutual interest, identifying possible convergence, as well as divergence, on global and regional issues. The focus is on developing a more nuanced understanding of each other’s concerns to narrow down differences where possible, and to promote avenues for joint cooperation. The trilateral meetings have coincided with an increasingly turbulent period in world affairs, where bilateral relations between the three powers are evolving. At the same time, as major powers in their own right, the three countries continue to deal with the impacts of the emerging global order.

Under these circumstances, it became necessary to identify practical ways to think through specific aspects of trilateral convergence and divergence. This resulted in the idea of a joint report, where each side would present a detailed investigation of the chosen issue from their country’s perspective. The December 2020 meeting of the trilateral dialogue identified Afghanistan as the subject of the first collaborative analysis.

Not only are India, Russia, and the US all stakeholders in a stable Afghanistan, they continue to be affected in myriad ways by the emerging situation in the war-torn country. Acknowledging that they do not have identical views on the issue, and that a consensus report might not fully capture the nuances involved, this report presents three separate essays that present how the scholars from the three countries perceive Afghanistan. Having analysed the issue from different perspectives, the authors seek to arrive at a conclusion, sketching ideas for a way forward where the interests of all parties are conserved.

This report is the result of the labours of Amb. Rakesh Sood (ORF), Dr. Alexey Kupriyanov and Dr. Alexey Davydov (IMEMO), and Mr. Michael Kugelman (Wilson Centre), who bring their vast experience and knowledge to this effort. This report is especially timely, given the ongoing efforts to determine the road ahead for Afghanistan.

Head of the Group on South Asia and Indian Ocean of the Center for Asia Pacific Studies, IMEMO, RAS