Arguably the most intractable security issue facing the administration of Mexican President Enrique Peña Nieto has been the dynamic and dangerous situation in the state of Michoacán, located on the Pacific in the southwestern portion of the country. During Peña Nieto’s first two years in office, the state has seen a significant increase in violence and criminal activities; the emergence, evolution, and internal struggles of armed “self-defense” groups (grupos de autodefensa, commonly referred to as autodefensas); and concerted federal government efforts to gain control and restore order in certain parts of the state, particularly in the state’s western Tierra Caliente region. Developments continue to unfold as criminal organizations, self-defense groups, and government all vie for control of Michoacán, a state that has long served as an important production and transit zone for drug traffickers.

While certain crime indicators—notably homicide—have fallen significantly throughout much of Mexico since 2011, Michoacán is one of the states where problems of crime and violence have been most intractable. It is also one of the places where citizen mobilization has manifested most visibly through vigilantism, with entire communities rising up to take the law into their own hands because of the real or perceived inability of authorities to address the problem of organized crime. Over the course of 2014, the worsening situation in Michoacán led the Mexican government to intervene heavily and try to regain the trust of the citizenry. This report therefore pays close attention to the efforts and challenges of the Mexican government and civil society to work together to establish order in Michoacán, offering important insights and recommendations for continued progress to that end. 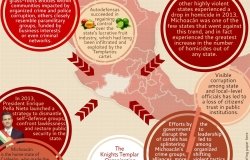