Crisis and Confrontation on the Korean Peninsula, 1968-1969 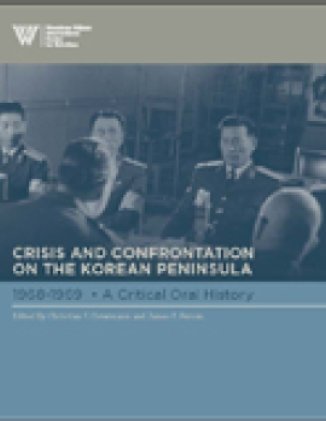 Crisis and Confrontation on the Korean Peninsula, 1968-1969 features the transcript of the first in a series of critical oral history conferences jointly convened by the Woodrow Wilson International Center for Scholars’ North Korea International Documentation Project and the University of North Korean Studies and a selection of primary source documents.

In September 2008, for the first and perhaps last time, a group of veteran diplomatic and intelligence officials from the Republic of Korea, the United States, and former East Germany, all active in Korean affairs in the late 1960s, assembled with a small group of scholars in an effort to provide context to, and fill gaps in the available documentary record. Crisis and Confrontation on the Korean Peninsula, 1968-1969 is the result of that historic conference and features extended and probing discussions on the factors influencing North Korea’s military adventurism during the late 1960s, the dynamics of the U.S.-ROK alliance, North Korea’s relations with the communist bloc, and the beginning of the dialogue between North Korea and South Korea.

The proceedings revealed the following:

- North Korea’s aggressive foreign policy in the late 1960s was not highly influenced by the communist superpowers, but was developed with the intention to bring about a revolution in and the liberation of South Korea while strengthening Kim Il Sung’s domestic power;

- The U.S. and South Korea were sensitive to the possibility of North Korean infiltration and attacks and could have prevented the Blue House Raid and the USS Pueblo Incident, but, due to logistical miscalculations and a failure to heed warnings and take precautions, did not do so;

- South Korea’s main concern after the USS Pueblo Incident was that the U.S. would enter compromise with North Korea and make South Korea’s own security more vulnerable;

- The Nixon administration adopted a less aggressive approach towards North Korea as a result of the Vietnam War;

- President Park Chung Hee did not have high expectations for the North-South dialogue, but suspected that direct discussions with Pyongyang could help to improve the security situation between North and South Korea;

Twenty-eight documents, obtained from archives in Russia, (East) Germany, Hungary, the Czech Republic, and the United States accompany the conference transcript and provide additional context and evidence on this period. Among the most noteworthy documents in the collection are a transcription of a speech by the Soviet Union’s Leonid Brezhnev and a number of detailed reports that were sent to and from the Czechoslovak government and party agencies. In Brezhnev’s speech at the 1968 Central Committee of the Communist Party of the Soviet Union Plenum, for example, he reveals that the Soviet Union was able to exert considerable influence in pressuring North Korea to take a less aggressive, militant stance in dealing with the Pueblo incident. The 1968 Czechoslovak reports present comprehensive overviews and analyses of the situation on the Korean Peninsula that immediately following the Blue House Raid and the USS Pueblo Incident, offering insight into the military and political policies of North and South Korea and their respective relations with the Soviet Union and the United States at the time.

Crisis and Confrontation on the Korean Peninsula, 1968-1969 is available online at no cost. Please see the link below to download the publication.