Endangered Communities? The Politics of Indigenous Peoples in Siberia 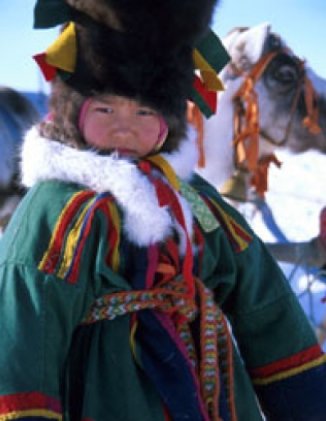 The recent suspension of RAIPON, the main umbrella organization that represents the interests of indigenous peoples in Russia, opens the question of how Russia’s indigenous groups will be able to defend their lands and rights. At a 28 January 2013 presentation at the Kennan Institute, Marjorie Mandelstam Balzer, Research Professor at Georgetown University, Editor of Anthropology and Archeology of Eurasia, and former Title VIII-supported Research Scholar of the Kennan Institute, Woodrow Wilson Center, discussed RAIPON’s fate, the broader challenges facing indigenous peoples in Russia, and the implications for Russian civil society.

RAIPON, the Russian Association of Indigenous Peoples of the North, Siberia, and the Far East, was suspended by the Russian government in November 2012.RAIPON was founded in 1990 and has a membership of over 300,000 people from 41 indigenous groups across Russia. Balzer explained that her presentation was timely because the Russian government recently allowed RAIPON to hold an emergency meeting to solve bureaucratic issues such as the need for properly registered logos, and the affiliation of groups from at least 42 regions within the Russian Federation in order to meet the requirements of a national public association in Russia.

Balzer contended that RAIPON was suspended not merely for administrative technicalities, but due to the group’s efforts to contest or influence major energy projects in the North, especially those of Gazprom, RosEnergo and RosHydro. Attention to the Northern regions and their indigenous peoples is also increasing because of the opening of the Northern Sea Route for shipping. Energy and transport projects are bringing an influx of investment and workers, in part administered by the Ministry of Regional Development, which is also responsible for indigenous peoples’ protection. Arctic development potential has increased private and government attention to indigenous peoples’ lands.

A key issue Russia’s indigenous communities face in defending their status stems from legal definitions of identity. Balzer reported that the state is narrowing that definition as much as possible so that fewer people get legal dispensations such as tax breaks, quotas, and special licenses for access to fishing, hunting, forestry, and land. “There is very little room for self-identity in these definitions,” Balzer explained, when the power of defining identity, in terms of holding protected status, is state-directed and specified for those in groups under 50,000.

Balzer warned that new legal constraints are being placed on Russia’s indigenous peoples. A draft law is set to update the 1996 law concerning the territories of indigenous peoples and their traditional land use. It stipulates that for indigenous peoples to remain with special status on their lands, they must practice subsistence living, reside on lands documented as ancestral, and they must know their native languages. These are challenging standards to meet: recent land auctions and changing boundaries have already shrunk indigenous territories, and many have lost their native languages because of Sovietization language policies. Nearly half their populations reside in villages and towns.

Diverse ways of life of indigenous groups, though they may be predominantly traditional, are legally problematic. Moscow recently revoked the fishing rights of a Nanai community in the Amur River area because they rode snowmobiles to reach their sites of traditional land use. A local judge had asserted that they should have been riding reindeer, yet they had never bred or ridden reindeer. Additionally, an Evenki community in Buriatia has been accused of running an illegal jade mining operation, although some Evenki had traditionally mined jade prior to the arrival of Russians in their region. The Evenki mine director is missing, with murder and multi-level corruption suspected. In other regions, Evenki reindeer breeders have lost their lands to hydroelectric dam projects. Ultimately, new laws may be used to further revoke the land rights of indigenous peoples in favor of Russian energy, transport and mining projects.

“The issue is not just the bureaucratic fight, but the trauma that has gone so deep in these communities,” said Balzer, quoting her Sakha colleague Uliana Vinokurova, who is worried about increased suicides and alcoholism. Another indigenous leader explained that in Sel’kup and Khanty areas: “People’s homes are being burned in suspicious fires” and several villages have been burned to frighten indigenous people, so that energy exploitation can continue without native interference.

Balzer stressed indigenous leaders do not automatically oppose development projects. Rather, they advocate for indigenous representatives to have input and ecological oversight concerning these projects. Native input is necessary to ensure that reindeer corridors, graveyards, and other sacred sites are protected. Additionally, the disastrous 2009 collapse of the Sayano–Shushensk Hydroelectric Dam in Khakassia demonstrates the importance of ecological oversight in energy projects. Balzer also referred to massive Gazprom purchases of land in the Sakha Republic (Yakutia), and to three documented gas pipeline breaches that have occurred near the Lena River, influencing Evenki reindeer breeding patterns and alarming Sakha ecology activists.

Evoking theorists like Arjun Appadurai and Benedict Anderson, Balzer explained that indigeneity is relational and shifting. A crucial generalization was that larger indigenous groups with their own republics (Altai, Buriatia, Khakassia, Sakha, Tuva) have significant legal protections and strong ethnonational community identities. These diminish when levels of homeland protection are just at the “okrug” level, or non-existent. Alarmingly, two Buriat satellite districts were recently abolished, and Native local parliamentary representation has been threatened in the Saami and Khanty-Mansi regions.

Balzer observed that RAIPON’s future has implications for Russia’s civil society as a whole. Individuals and groups increasingly have been put into “opposition” or “dissident” categories that they do not recognize for themselves.  Balzer argued, “a strategic chill is being applied by the state on various symbolic targeted actors, and the indigenous peoples of the North, Siberia, and the Far East, as represented by RAIPON, have joined a line of other recent examples,” such as key ecology activists, plus Igor Magnitsky, Aleksei Navalny, and members of Pussy Riot.  However, the recent crackdown on RAIPON has generated an ironic positive effect: the threat to its existence has sparked increased solidarity among often in-fighting activists of indigenous peoples. Balzer concluded: “One of the hallmarks of civil society is how it handles its indigenous peoples.”