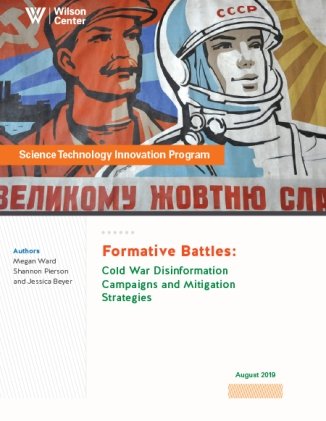 During the Cold War, the U.S. and the Soviet Union refined covert methods of political intervention and conflict, making use of proxy wars, election interference, and disinformation campaigns to advance their respective interests. Work such as Dov H. Levin’s research tracking election interference (2016) illustrates that both superpowers used disinformation as a core tactic throughout the Cold War and the subsequent decade. Throughout the Cold War, the U.S. and USSR competed in an arms race of fictions, attempting to cultivate ideological support internationally and domestically.

In response, presented with sophisticated and widespread Soviet disinformation, the U.S. created a thengroundbreaking interagency organization called the Active Measures Working Group (AMWG). The AMWG operated using a “Report-Analyze-Publicize” strategy that prioritized overt disinformation and successfully challenged Soviet active measures in the 1980s (Bailey, 1998). At the international level, both the Non-Aligned Movement, with its focus on non-intervention in the internal affairs of other countries, and the United Nations’ General Assembly more generally attempted to address the issue.

Some have posited Cold War mitigation strategies could be used to combat the newest itineration of harmful propaganda and disinformation (Cull, et al, 2017; Neal, 2019; Selga & Rasmussen, 2017; Deeks, McCubbin, & Poplin, 2017), but while Cold War disinformation mitigation tactics may provide aspirational frameworks for modern efforts, they are largely inapplicable in a modern disinformation battlefield. The birth of the internet, the removal of centralized and shared information sources, and the increase in the number of actors involved in information dissemination creates a landscape substantially different in nature.

Formative Battles: Cold War... by The Wilson Center on Scribd

Ph.D. candidate at the University of Washington’s Henry M. Jackson School of International Studies and researcher for the Jackson School’s Global Research Group