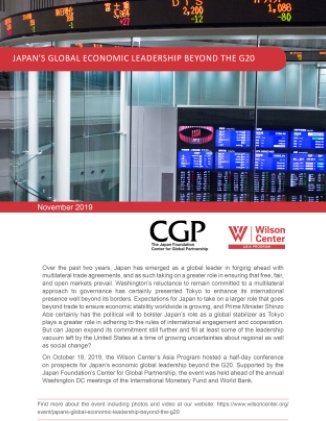 Over the past two years, Japan has emerged as a global leader in forging ahead with multilateral trade agreements, and as such taking on a greater role in ensuring that free, fair, and open markets prevail. Washington’s reluctance to remain committed to a multilateral approach to governance has certainly presented Tokyo to enhance its international presence well beyond its borders. Expectations for Japan to take on a larger role that goes beyond trade to ensure economic stability worldwide is growing, and Prime Minister Shinzo Abe certainly has the political will to bolster Japan’s role as a global stabilizer as Tokyo plays a greater role in adhering to the rules of international engagement and cooperation. But can Japan expand its commitment still further and fill at least some of the leadership vacuum left by the United States at a time of growing uncertainties about regional as well as social change?

On October 18, 2019, the Wilson Center’s Asia Program hosted a half-day conference on prospects for Japan’s economic global leadership beyond the G20. Supported by the Japan Foundation’s Center for Global Partnership, the event was held ahead of the annual Washington DC meetings of the International Monetary Fund and World Bank.  This report is a summary of that event.

Japan’s Global Economic Lea... by The Wilson Center on Scribd