Kennan Cable No.1: In Kyiv, The Front Is a Phone Call Away 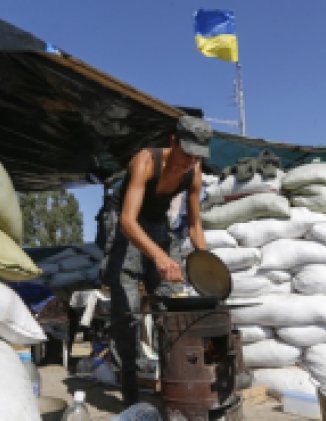 My conversation with a Ukrainian freelance reporter, Nikolai Vorobiev, at a park across the street from the imposing Cabinet of Ministers building in Kyiv, is interrupted by a call. Nikolai just spent three weeks with the Right Sector Volunteer Ukrainian Corps battalion, known by its Ukrainian acronym DUK, which is fighting against pro-Russian separatists in the East, and is sharing his experiences with me. “It’s a member of DUK’s reconnaissance group,” he says and picks up. “Hello my friend, how are you!” As I listen to Nikolai’s side of the conversation, it dawns on me that the caller is asking him to bring back night vision gear. “Friend, you know it’s expensive… You really need it? Ok, I’ll try to hit up a few businessmen…”