"When we arrived in Russia, the commentary at the time was of a piece, it was the same question over and over again: who is Putin?" said Peter Baker, former Moscow Bureau Chief for the Washington Post at a 10 January 2005 Kennan Institute talk. Baker, along with Susan Glasser, also a former Washington Post Moscow Bureau Chief, discussed their assessment of Russian president Vladimir Putin based on four years of experience as Moscow-based journalists.

Baker and Glasser began working in Moscow at the end of 2000, early in Putin's first term as president. Baker noted that at the time they arrived, Putin was an unknown and enigmatic figure. However, by the time they left Russia in 2004, he argued, Putin had clearly demonstrated that he is opposed to civil society, pluralism, and the rule of law, as well as strongly influenced by his roots in the KGB.

According to Baker, during the first four years of his presidency many people in the West were "willing to give Putin the benefit of the doubt." He argued that Western observers wanted to believe that Putin was a reformer, a Westernizer, and a supporter of democracy and market economy. Baker noted that "particularly in his early years, he did things people saw as moving Russia toward a more open, modern, integrated economy." Glasser added that she and Baker arrived in Moscow with this point of view. "Putin seemed to be all about stability and doing the right thing," she explained. "Obviously, that hasn't proven to be the case over the last weeks and months and years."

Throughout his first term, Putin demonstrated that he was hostile to independent media, political opposition, rule of law, and other aspects of Western-style, liberal democracy, according to Baker and Glasser. However, Baker contended that many people chose to interpret Putin's intentions as basically in favor of democracy and reform, and to make excuses for his anti-democratic actions or view them as out of character.

Baker gave the example of the arrest of Mikahil Khodorkovsky and the state's attack on the Yukos oil company: many Western analysts were convinced that Putin did not really mean to have Khodorovsky in jail, and clearly would not want to destroy one of Russia's most profitable and transparent companies. These analysts were continually surprised by the extent of the government's attacks on Khodorkovsky and Yukos. Baker contended that these actions were in fact very much in character for Putin, and illustrate a pattern that is equally evident in Putin's handling of other issues, such as the 2004 hostage crisis in Beslan.

Baker and Glasser are convinced that Putin is taking Russia down the path of authoritarianism, and they explained that this is becoming increasingly clear to many people. According to Glasser, the Putin administration has backed away from earlier rhetoric supporting Western-style democracy: "Even the President's closest advisors and friends now talk about a Russia that is not ready for democracy, is not used to democracy, where the authoritarian tradition would be a more comfortable fit."

Baker argued that some of Putin's recent moves, including the attacks on Yukos and the halting of popular elections for regional governors, have disillusioned some of his Western supporters. "There was that moment when Putin got up and said that we're not going to have election of governors anymore in order to fight terrorism. We're going to stop elections in 2007 to fight terrorism in 2004. Then a lot of people said…that's not logical," Baker said. "I think for a lot of people it became clearer and clearer at that time, but in fact it was part of a pattern we saw from the very beginning."

The people of Russia have so far been willing to support Putin's tightening of state control, and the lack of a viable democratic opposition leads to the conclusion that this is not likely to change in the near future. According to Glasser, she came to Russia believing in the truism that with the passage of time, Russia would move away from its Communist past and toward liberal democracy. She noted that one of her biggest surprises in Russia was discovering that the generation of people who did not experience the Soviet Union—whom she expected to be the most strongly pro-democracy—actually have an idealized view of the USSR and of Russia's former status as a superpower.

Baker argued that the turmoil of the 1990s led many Russians to associate democracy with poverty and chaos. Putin therefore finds a receptive audience when he emphasizes order and economic growth over democracy and civil liberties. Glasser explained that Putin has expressed support for a type of democracy that would be "suited to Russia's unique traditions." However, she argued that Putin's vision of democracy "is very much not about the involvement of the people in an electoral or political process; it is about achieving the outcomes that are desired by the Kremlin, and exerting as much control as the state is able to over the process that leads to the desired outcomes." 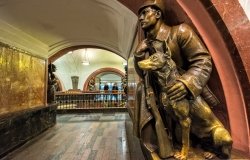