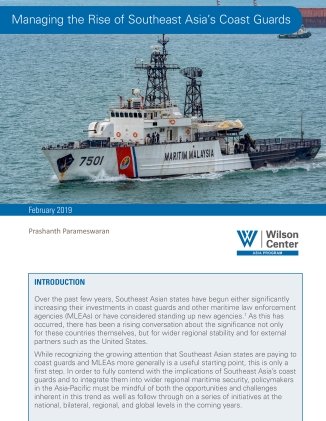 Over the past few years, Southeast Asian states have begun either significantly increasing their investments in coast guards and other maritime law enforcement agencies (MLEAs) or have considered standing up new agencies. As this has occurred, there has been a rising conversation about the significance not only for these countries themselves, but for wider regional stability and for external partners such as the United States.

While recognizing the growing attention that Southeast Asian states are paying to coast guards and MLEAs more generally is a useful starting point, this is only a first step. In order to fully contend with the implications of Southeast Asia’s coast guards and to integrate them into wider regional maritime security, policymakers in the Asia-Pacific must be mindful of both the opportunities and challenges inherent in this trend as well as follow through on a series of initiatives at the national, bilateral, regional, and global levels in the coming years.

Global Fellow Prashanth Parameswaran's newest report looks at these organizations in his newest report for the Asia Program, "Managing the Rise of Southeast Asia's Coast Guards."  Click here to download a copy.

Managing the Rise of Southe... by The Wilson Center on Scribd