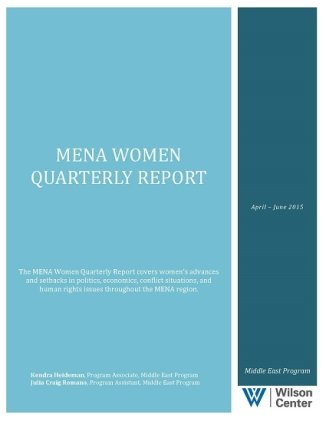 Some important news stories from this quarter involve Iranian women using art and sport to make their voices heard. Shirin Neshat—the internationally known artist whose most recent exhibition is currently on view at the Hirshhorn Museum in Washington, D.C.—expresses her beliefs on gender, politics, and social issues through her artwork. Another Iranian woman artist, Atena Farghadani, had her artwork and political beliefs suppressed in early June when she received a 12-year prison sentence for her cartoons that depict parliamentarians as animals. The crimes of her artwork include “insulting members of parliament through paintings” and “spreading propaganda against the system.”

One of the most prominent ongoing stories from this quarter is the debate over whether women can attend male sporting events in Iran. In June Vice President for Women and Family Affairs Shahindokht Molaverdi said the government would partially open its stadium doors by allowing a limited number of Iranian women to watch matches. Despite the Iranian government’s easing on the ban on women at sporting events, women’s rights activists point out that various government officials are providing conflicting statements on the matter; some attribute this to growing pressure from conservative hardliners to keep the ban in place.

Discrimination against women remains problematic throughout the MENA region. In the last few months several articles highlighted how women in Egypt experience harassment in a variety of circumstances. For example, women who are victims of abuse often confront further harassment because “in Egypt, it is common to blame women for being attacked, particularly when expressing their right to protest.” Moreover, some Egyptian women choose to wear the hijab “to avoid recurrent harassment” not because of religious beliefs. Transgender women have also been targeted as part of a crackdown since 2014 in Egypt. Women not only face harassment on the streets but also online—cyber sexual harassment is becoming increasingly common.

Despite these ongoing issues for Egyptian women, two recent studies released show a decline in female genital mutilation (FGM) in Egypt. In May Egypt’s Ministry of Health reported that 92 percent of married women in Egypt have undergone FGM, which is a decrease from 97 percent in 2000. In the same month the Egypt Demographic Health Survey indicated FGM had decreased among 15- to 17-year-old girls by 13 percent since 2008. Egypt also announced a National Anti-Female Genital Mutilation Strategy in June, though activists indicate this initiative could fall short. One of the first reports on FGM in Iran was released in June noting that the procedure is not only practiced but “prevalent” in parts of at least four provinces in Iran.

There were numerous stories about the treatment of domestic workers throughout the region. Iran witnessed a riot after a Kurdish chambermaid was murdered because of suspected foul play. Women from Sierra Leone said they were “sold like slaves” in Kuwait and then resold to perform domestic work in the country. Saudi Arabia executed two Indonesian maids in April—both were beheaded after being convicted of murder.

Over the last few months there have been a number of accounts of abuse of women by governments. According to a report by the Lebanese Center for Human Rights from April, more than half of female detainees in Lebanon were “subjected to severe torture” in 2013 and 2014. The International Federation for Human Rights reported in May that Egyptian authorities have been using sexual violence on a “massive scale” against detainees. Tunisia’s Truth and Dignity Commission revealed that women over the past six decades have faced police cruelty, violence, and rape.

While human rights issues continue to affect women in the MENA region, there were several instances of progress in the last three months. In April an Egyptian man received a five-year prison sentence for sexually harassing a woman on a bus in 2013. Egypt’s Ministry of Interior adopted a new national strategy to combat violence against women in May. Also in May Morocco changed its restrictions on abortion to allow for the use in cases of rape, incest, and danger to the mother’s health. Women in Saudi Arabia are increasingly using Uber and other ride-share apps because of the country’s ban on women driving and other social stigmas.

While the human rights situation has improved for some women in the region, women living in ISIS-controlled territories remain vulnerable to sexual violence and continue to experience horrific treatment. In June there were reports of ISIS selling abducted teenage girls at slave markets “for as little as a pack of cigarettes,” according to UN Special Representative on Sexual Violence in Conflict Zainab Bangura, and selling 42 Yazidi women to fighters in Syria “for between $500 and $2,000.” In Iraq there has been a return of blood money marriages—compensation to resolve tribal conflicts—a practice women in Baghdad protested in June.

There have been reports in the past few months about women who escaped from Syria and Iraq or were freed from these areas. In a recent Human Rights Watch report, Yazidi women and girls who escaped ISIS detail the systematic rape and sexual slavery they endured while in captivity. A young French woman who traveled to Syria earlier this year to join ISIS was able to escape Raqqa in June by crossing into Turkey. She is one of the few women known to have escaped from ISIS—as of May, only two of the estimated 600 Western women who traveled to Syria to join ISIS have managed to flee. In May ISIS freed two Christian women who had been held in Syria since February, along with more than 200 other Assyrian Christians. In June a British woman was released by al-Nusra front in Syria after being held for seven months.

Despite the ongoing mistreatment of women in conflict areas, there are women are working to support other women particularly in refugee camps. For example, female Syrian refugees in Lebanon are becoming community leaders in these camps. They are also implementing art initiatives to help women tell their stories and to “create an image of these women beyond that of a victim.”

Syrian refugees in the Kurdish areas of Iraq have contributed to their communities and their families by joining the workforce. A recent article by the Associated Press explained that thousands of Syrian refugees and Iraqi internally displaced people (IDPs) have found jobs in the retail industry, particularly in malls, which do not appeal to the local population. One of these women found a position that pays up to five times what she would have made back in Damascus.

Women throughout the region are not only participating in local economies, but are establishing their own businesses. Lebanese women are helping to grow the economy in Beirut, which is an important center for start-ups in the MENA region. Women have spearheaded businesses that address gaps in sports technology, children’s entertainment services, automobile repair services, venture capital, and children’s toys. Women in the Gaza Strip have established their own businesses with the support of nine local financial institutions that offer interest-free loans. Many of these programs aim to economically empower Gazan breadwinners or widows and have funded projects such as agricultural cultivation and small-scale manufacturing. Ultra-Orthodox women in Israel have also founded businesses, and this past quarter more than 600 women participated in a conference sponsored by an organization that supports ultra-Orthodox women’s business ventures with a special consideration to the community’s needs.

Following the March 17 Israeli parliamentary elections—in which women won 24 percent of Knesset seats—women are participating in the highest levels of the new government. Aida Touma-Suleiman, who ran on the Joint Arab List in the elections, was unanimously elected to chair the Committee on the Status of Women. Her appointment is particularly noteworthy because she is the first Arab to be elected to head a Knesset committee. Ayelet Shaked, the new Israeli Justice Minister who is a member of Jewish Home party, has been criticized by some and praised by others for her right-leaning politics and support for settlements. In May Shaked and the two other women ministers were edited out of a cabinet photo by some ultra-conservative Israeli newspapers.

The upcoming Saudi elections will also break records for women’s participation in politics. In May a draft law was introduced to allow women to vote for and run in elections for the first time in the country’s history. This legislation reflects adherence to the announcement the late King Abdullah made in 2011. Municipal elections are expected to take place in Saudi Arabia in December 2015. Women already participate in government in Saudi Arabia in the parliament and consultative council, but women do not run for these positions because the king appoints them.

The MENA Women Quarterly Report will continue to report on these elections, and other news stories that affect women in the region, in the months to come.