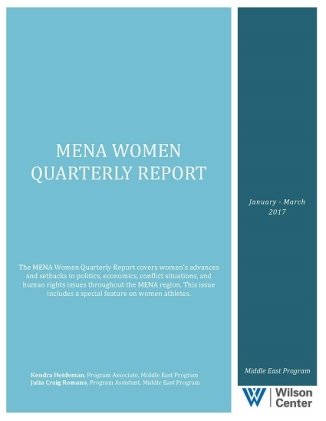 In February 2017, Nike launched an advertisement that highlighted women athletes from throughout the Arab world—a figure skater, a skateboarder, and a boxer, among others—with the tag line “what will they say about you?” The tagline has a double meaning; not only does it refer to the way people remember the achievements of these athletes, but it is also a phrase used to try to stifle women who challenge social norms. This advertisement represents one of the dominant themes in the news from the last few months: the achievements of Middle Eastern women athletes and some of the challenges these women face.

During the last quarter, news outlets profiled both professional and amateur women athletes from throughout the region. Zahra Lari, an internationally known figure skater from the UAE, spoke with the Financial Times about her work to qualify for the 2018 Winter Olympic Games (she was also featured in the aforementioned Nike advertisement). Lari would be the first Emirati to participate in the Winter Olympics. Halah Al-Hamrani, a Saudi boxer and trainer, spoke with Arab News about the abundance of interest from women in her kickboxing classes. Rahma Diab, an Egyptian roller derby player, spoke about her team, the CaiRollers, and roller derby’s presence in Egypt. Other profiles featured an Iranian chess player who holds the titles of International Master and Woman Grandmaster, a biker from Iran, a cyclist from Iraq, and a group of women who want to introduce baseball to Gaza.

Stories in the news from the past three months also discussed issues of women’s access to sports. In February, Princess Reema bint Bandar, Vice President for Women’s Affairs at the General Authority of Sports, announced that the Saudi government would begin issuing licenses for women-only gyms. In March, Qatar hosted the 5th GCC Women Games, featuring sports such as archery, fencing, and basketball. Other articles included the preparation for Gaza’s first women’s sports academy and the expulsion of Iranian women dressed as men from a soccer (football) match.

There were three main themes in the news in the last three months about women in the economy and the labor force: women in STEM, gender diversity, and the gender pay gap in the workforce. Samira Negm launched an app that aims to alleviate commuting issues in Cairo; 14-year-old Alia Al-Mansoori won the first “Genes in Space UAE Competition” and hopes to go to Mars one day; and Intisaar Al Kindy led the way for women engineers and geoscientists, in her native Oman and globally. Additionally, the Israeli Defense Forces (IDF) are actively recruiting women to join its tech corps, a group that is dominated by men.

Other articles discussed gender diversity in the workplace and governmental actions to improve the gender ratio. One of the intended goals of the Saudi Ministry of Labor’s “Nitaqat” program is to increase the number of Saudi women in the workforce “to 28 percent by 2020.” The Saudi labor market’s inclusion of women in the workforce is already on an upswing—the General Organization for Social Insurance announced that between December 2012 and October 2016, the number of women in the private sector increased by 145 percent. A McKinsey study reported Morocco’s GDP could increase by $30 million by 2025 if Morocco’s government addressed the lack of gender diversity in the country’s businesses.

News outlets reported heavily on the gender pay gap for women in the Middle East to coincide with International Women’s Day (March 8). According to a report from the Palestinian Authority Central Bureau of Statistics, on average, Palestinian women’s wages are 73 percent of the wages of Palestinian men. The article suggests one reason for this is there is no equal pay mandate for the private sector in the Palestinian territories. Women in Morocco and Israel face similar pay gap issues: a study by the Moroccan Directorate of Financial Studies and Forecasting (DEPF) found women at “similar academic and professional levels” as their male counterparts make 17 percent less in wages, and the Israeli Central Bureau of Statistics reported that Israeli women make 31.7 percent less on average than Israeli men do.

There have been several legal and legislative developments related to human rights issues throughout the MENA region in the last quarter. A number of these updates deal with marriage and divorce. For instance, a female Iraqi MP proposed a law that would encourage polygamy to “protect the dignity” of widows and divorced women and to provide financial incentives to men. In Tunisia, 60 human rights groups called for an end to a marriage decree that bans Muslim women from marrying non-Muslim men. An Israeli rabbinic court denied a woman a divorce despite her husband’s admitted domestic abuse; the court ascribed the violence to the woman’s filing for divorce. Egypt’s President Sisi, alarmed by the country’s high divorce rate, suggested legislation to end the practice of verbal divorces. Also in Egypt, parliamentary committees approved a draft bill to impose stricter penalties for sexual harassment and an amendment to provide inheritance protections. Moreover, Lebanon’s parliament will consider the abolishment of Article 522, the so-called “rape law,” which a parliamentary committee voted to repeal in December. A Jordanian royal committee recommended the abolishment of a similar law (Article 308) that permits rapists to avoid punishment by marrying their victims.

While some of these developments attempt to improve women’s rights, a number of articles in the past few months underscore the ongoing violence against women in countries across the region. Tunisia’s Minister of Women, Family and Children, Naziha Laabidi, said the increase in violence against women and children is “very alarming.” Morocco’s Minister of Solidarity, Family and Social Development, Basima Hakkaoui, discussed a recent report that found 66 percent of sexual assaults against Moroccan women occur in public. There were reports of a teenage girl in Iran who was beaten by the country’s morality police for wearing torn jeans; such incidents are often reported on the phone app Gershad and on social media. Saudi women, too, have been encouraged to report harassment, abuse, and rape by using the hashtag #Break_Your_Silence_Speak_Up.

Along with the legal advances and constructive outlets for women to report violence, there were other positive stories in the region in the past quarter. Women’s rights groups and activists in Tunisia are providing support to victims of gender-based violence, and an international development agency in Turkey is supporting “women at risk of violence around the world.” In addition, Al-Azhar plans to release a document detailing women’s rights under the Quran following President Sisi’s announcement that 2017 is the “year of women.” Egyptian human rights activist Mozn Hassan received the Right Livelihood Award in Cairo, after she was banned from travel by Egyptian authorities.

Women’s role in public service was another major theme in the news from the last few months. In early January and February, news outlets speculated that Marzieh Vahid Dastjerdi, the Minister of Health and Medical Education of Iran from 2009-2012, would run in the upcoming May presidential elections. No woman has ever qualified to run for president in Iran, and there is no further news of Dastjerdi’s candidacy beyond these initial rumors. In February, women in Lebanon protested for a legislated 30 percent quota for women in the Lebanese parliament; women currently only comprise 3.1 percent of the Lebanese parliament. MP Alain Aoun announced that the administrative and justice committee was looking into the possibility of adding a quota to electoral law. Also in February, the Egyptian government swore in the country’s first woman provincial governor: Nadia Abdu serves as the governor of the Beheira province.

Women’s presence in other aspects of public service continued to grow during the first three months of 2017. The number of Saudi women diplomats rose to 113—a 20 percent increase from 2015. Hanan bint Khalfan Al Salimi is the first woman to run a Police Rescue Department in Oman. Women in Egypt had varied responses to the new public service mandate announced by the Egyptian government; some women approved of the measure, some were unhappy they had to complete compulsory service for no pay, and some would have preferred the government opened military service to women instead of limiting them to civil service. Women in religious leadership is also growing in the Middle East: Rola Sleiman began her role as the Arab world’s first ordained female pastor in Lebanon, and the Egyptian Religious Endowments Ministry announced it would appoint 144 female imams—a first for the country.

In the past few months, there were stories about women in conflict situations in Iraq, Syria, and Yemen, and about women fighting against ISIS. In Iraq, almost two million women are widowed or divorced; those who have escaped from ISIS continue to experience trauma; the charity Yazda, which provided treatment to women who escaped or were rescued from ISIS, closed in early January; self-immolations are increasing for Iraqi Kurdish women; and ISIS has raped and tortured Sunni Arab women in Hawija, according to Human Rights Watch. Moreover, in early January UN agencies reported the “health, hygiene and protection needs of women and girls displaced in Aleppo are staggering.” In Yemen, Amat al-Aleem al-Asbahi, who championed female literacy, was killed; women have demonstrated for an end to the Saudi-led campaign, which the UN estimates has left 19 million Yemenis in need of humanitarian assistance; and female fighters in al-Qaeda in the Arabian Peninsula (AQAP) were killed in a January raid in central Yemen.

In addition to the Yemeni women engaged in combat, the ranks of women fighting against ISIS have continued to grow. More than 1,000 Arab women have joined Kurdish fighters in the Syrian Democratic Forces (SDF), and the Kurdish Women’s Protection Units (YPJ) has been training Arab women as well. Women have also created all-female groups to fight against ISIS, including the “Daughters of the Sun,” a Yazidi group led by former popular singer Khatoon Khider, and Khansawat Souria, which is part of the Syrian government’s army.

Despite the ongoing difficulties for women in conflict areas in the MENA region, there were several positive reports for ISIS survivors and refugees in the last quarter worth highlighting. In February, an Iraqi security unit arrested two slavers who trafficked Yazidi women for ISIS; and in March, Iraqi security forces freed 150 women from an ISIS prison in Mosul. Within the past few months, a new psychological trauma center at the University of Dohuk was set to open to help Yazidi women and children who survived ISIS. In addition, the UAE recently launched an initiative to support Syrian refugees in Jordan, and a Syrian woman in Lebanon helps Syrian refugees as an outreach volunteer for the International Rescue Committee.