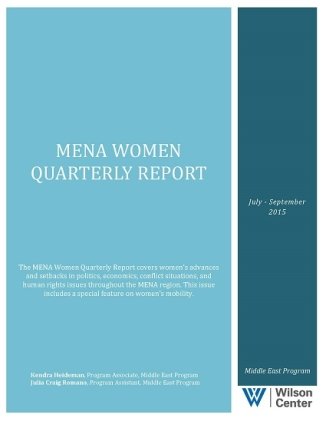 Special Feature: Issues of Women’s Mobility in the MENA Region

During this quarter a number of news outlets throughout the region focused on women’s mobility and the rise of women-only transportation. In Egypt, women-only taxis are “being hailed as one more weapon in the battle against sexual harassment and violence toward women.” Female students in Jordan are working on a similar transportation service for female passengers called SheCab that would launch next year “despite the venture already having sparked an uproar on social media.” In Saudi Arabia women will have the opportunity to use Easy Taxi, which will provide free taxi rides for Saudi women going to vote in this year’s municipal elections.

Designed to combat ongoing harassment and violence, women-only transportation has mixed results in the Middle East and elsewhere in the world. Moreover, women throughout the region continue to face limited rights related to freedom of movement. In Iran, for example, women could have their cars impounded if they are driving “with a poorly fixed veil or without their heads covered.” A female Iranian athlete was unable to compete in an international tournament because in Iran a woman is required to receive her husband’s permission to travel. While women throughout the region experience varying levels of restrictions on their mobility, women-only transportation in some countries offers a step in the right direction.

Women in Politics and Public Service

The women in Saudi Arabia who decide to take advantage of Easy Taxi’s offer to provide free fares to voting centers for the December 2015 municipal elections will be the first women in Saudi history to have voted in an election. This historical election has received some backlash within the country; for instance, Saudis who disapprove of women’s participation in the elections have launched Twitter campaigns to discourage women from participating. These campaigns have been met by counter-campaigns supporting women’s political participation.

While the lead-up to the recent Federal National Council (FNC) in the United Arab Emirates was less controversial than the lead-up to the Saudi elections has been, some Emirati women characterized the results of the FNC elections as “disappointing.” Seventy-six of the 330 eligible candidates were women (23 percent), but of the 20 representatives that were elected only 1 is a woman (5 percent), even though women represented 39 percent of the Emiratis who voted. Omanis have also expressed their "concern" about women’s representation in elected councils, particularly in light of the upcoming Shura Council elections. According to the Omani Ministry of Interior, only 20 of the 596 candidates (3 percent) for the 84-person council are women.

The September local and regional elections in Morocco yielded positive results for women’s representation. Women nearly doubled the number of seats they hold in Morocco and won 6,673 of the 31,503 seats (approximately 21 percent).

Governments have also selected women to participate in public service by appointing or recruiting them to key positions. Ghada El-Shahawy will serve as an aide to Egypt’s Minister of Justice—the first women in Egyptian history to serve in this capacity. Since August the Kuwaiti government has been recruiting women to serve as guards for parliament to “deal with changes that necessitate the development of the security system.” Saudi Arabia started the process to appoint women to the Ministry of Hajj to serve women pilgrims. According to Al Arabiya’s sources, at least 100 women are needed to fill these posts. For the first time, an Israeli woman is an ambassador to an Arab country; on September 7, Einat Shlein began her appointment as Ambassador to Jordan.

News from the last several months about human rights in the MENA region continued to focus on women’s harassment. In some cases, social media and new technology have highlighted the issue of harassment and helped identify culprits. In Saudi Arabia women use “social media as a resource to document and confront the ongoing problem of harassment” they experience. Some argued that technology cannot address such a pervasive problem. Turkey, for example, has developed a phone app that an individual who is being attacked can use to call for help without the attacker knowing, but it will “do nothing to solve Turkey’s domestic abuse problem until the country’s police and judicial system give women the protection required under Turkish law.”  In other countries, social media can be used to potentially exacerbate the problem: Egypt’s recent anti-harassment Facebook campaign prompted considerable controversy with its slogan “She’s not worth it, it’s not like she’s Angelina Jolie,” with many believing the campaign places blame on women for being harassed.

Women’s clothing, another perpetual source of controversy, was the subject of a number of recent articles in the region. One report indicated two women in Iran had been fined $260 for “bad hijabs,” while another quoted an Iranian cleric who said punishing women for not adhering to rules regarding mandatory hijab is “problematic in terms of sharia law.” Elsewhere, Egypt’s Cairo University recently banned female teachers from wearing the niqab because students complained of "poor communication" during classes. Related articles highlighted the crackdown by Egypt’s “morality police” on female musicians, dancers, and others for improper attire, among other transgressions. Egypt’s Musicians Syndicate also imposed a dress code on female singers requiring them to wear “decent, unrevealing clothes during their performances.” Three Egyptian dancers have been charged with “incitement, immorality and indecency.”

Notwithstanding these examples of human rights issues, there were some efforts to improve life for women in the region. Kuwait introduced legislation that would provide domestic workers with expanded rights—a “major step” that other Gulf countries should follow, according to activists. In early September Israeli women activists in the Women Wage Peace group met with Prime Minister Benjamin Netanyahu following a 50-day hunger strike to “promote a diplomatic arrangement to end the [Israeli-Palestinian] conflict.” Recently in Tunisia the group Chouf was founded to organize, educate, and mobilize the country’s lesbian community to combat “deep-seated prejudice.”

Women Participating in the Labor Force

Reports during the third quarter presented mixed success for women in the labor force throughout the Middle East. Women in Turkey, Iran, and the Palestinian territories continue to face setbacks in employment. According a recent World Bank report, mothers in lower socio-economic brackets have refrained from joining the labor force because the cost of child care is too high relative to the financial gains from employment. A study by the Turkish Statistics Institution found that Turkish women working in the formal sector make far less than their male counterparts; in 2014 the average occupation income was 15,681 liras for women and 20,084 liras for men.

Women in Iran have also faced setbacks while trying to gain access to the workforce. Shahindokht Molaverdi, the Iranian Vice President for Women and Family Affairs, highlighted in a recent speech that unemployment is particularly high among university-educated women and single mothers. The Iranian Ministry of Education also implemented a new quota for 3,703 vacant education positions; registration guidelines for the qualifying exam stated that women competed to fill only 630 of those positions—the rest were reserved for men.

Al-Shabaka, a Palestinian policy organization, released a report showing Palestinian women’s workforce participation rate is among the lowest rates in the world, despite having the highest ratio in the MENA region of girls’ primary and secondary school enrollment. The report notes low rates of entrepreneurship among women and the absence of women in two of the four major sectors in the Palestinian territories’ economies: construction and transportation.

Women elsewhere in the MENA region have had greater success in gaining entry into the workforce, especially in the private sector. In the UAE, the ratio between men and women in the workplace is nearly equal in small and medium-sized enterprises (SMEs), and nearly half of the country’s SMEs have a majority of female staff. The UAE has implemented programs to ensure that women’s participation in the private sector—particularly in high-tech entrepreneurship—through the foundation of camps, workshops, and organizations such as Fun Robotics.

According to figures released by the Omani National Centre for Statistics and Information (NCSI), between 2003 and 2015, the number of women working in the private sector rose from 13,385 to 47,441 (a 254 percent increase, whereas the female Omani population only increased by 36.5 percent). Women in Oman will benefit from a new draft law that will mandate sixty-day paid maternity leave for both private and public sector workers.

Women in Saudi Arabia are also participating in the workforce on a larger scale than they previously have. According to the Saudi Central Department of Statistics and Information, the number of women who have joined the workforce has increased by 48 percent since 2010. It should be noted, however, 60.3 percent of unemployed Saudis are women, and women only represent 16.4 percent of employed Saudis.

ISIS continues to commit violence and human rights violations against women in Iraq and Syria. ISIS beheaded two women in Syria, according to the Syrian Observatory for Human Rights reports in July, and in August ISIS executed more than 30 Iraqi women for refusing to marry some of the group's fighters. There were several reports detailing the systematic rape of Yazidi women and girls, the reality of life for women living in the Islamic State, and the price list for sex slaves circulated by ISIS. A number of articles also discussed what could be done to help women in ISIS-controlled territories, including calls by UN Special Representative on Sexual Violence in Conflict Zainab Hawa Bangura, Special Envoy for the United Nations High Commissioner for Refugees Angelina Jolie Pitt, and YAZDA (a Yazidi support-aid group), among others, to address the problem of sexual violence in conflict and provide support to victims.

Although women are often the victims of ISIS’s violence, some women help perpetrate such violence. Women in ISIS play a “crucial role” and articles from the past three months have profiled the women who secretly keep ISIS running and those in the Al-Khansaa brigade who police other women. Some reports detailed the number of women who have traveled to Iraq and Syria to join ISIS: for example, more than 40 Saudi women have joined ISIS since 2011, and 38 percent of Moroccans who joined ISIS in 2015 are women. Women are also involved in recruiting efforts for ISIS or coordinating attacks, including two Moroccan women who were arrested for plans to carry out attacks in Morocco and women encouraging others to join ISIS in Libya through social media.

In addition to women in ISIS-controlled territories in Iraq and Syria, women in Yemen are also experiencing violence as a result of the ongoing conflict there. The UN Population Fund reports that Yemeni women already suffered from gender-based violence and inequality, problems which have only intensified since the conflict began. Women’s activists in Yemen strongly condemned violations perpetrated by the Al Houthi militia, saying women were “subjected to grave human rights violations [yet] women were active participants in the revolution that drove Saleh out of power.” Yemeni women also recently held a rally to protest Saudi Arabia’s continued military campaign in the country.

During this quarter there were some positive stories about women in conflict areas, including an article about a Syrian refugee who created a women’s community center in southeast Turkey which offers workshops, training, and support for other women refugees. Another article discussed the motivations of women who join Kurdish militias like the YPJ, noting these women are “motivated by a desire, not only to fight ISIS and other enemies of the Kurds, but, more importantly, to bring about an egalitarian society rooted in feminism and guided by principles of social justice.” 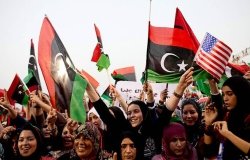 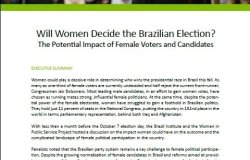 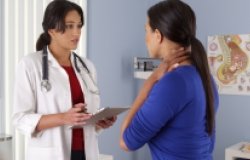 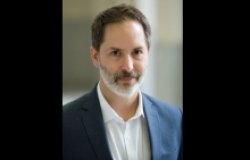 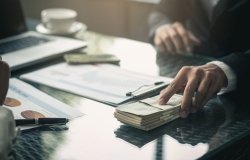