Mexico's National Guard: When Police are Not Enough 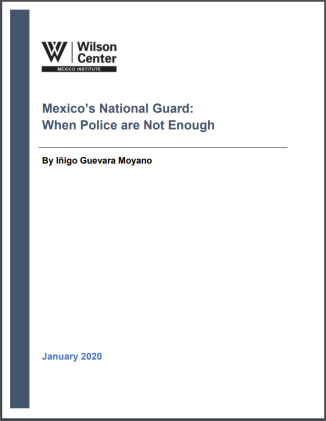 "Mexico's security services appear to be trapped in an operational impasse that highlights the need for profound institutional redesign, which will lead, yet again, to the creation of a new security force. AMLO’s administration is not the first (and likely not the last) to launch a complete restructuring of the security apparatus in what appears to be an unending search for the ideal security force. Each administration since the advent of democracy in 1997 has tried to reshape the security structures with some overall but limited progress, as most civilian-led law enforcement organizations become political piñatas which are re-imagined, re-organized, re-uniformed, re-painted, and basicaly re-invented every 6 years.

From the late 1990’s, Mexico’s leaders have sought -in the absence of effective, efficient, or trustworthy civilian law enforcement- to create a hybrid, intermediate, force that can combine trustworthy military-trained personnel with a law enforcement mandate under civilian leadership. This paper explores how -despite constant intentions to build a civilian led national police force - Mexico’s democratically elected political leaders have had to rely on the military as the only constant state response to the spiraling violence and everyday threat of organized crime. Even under a self-titled ‘alterative’ political leadership, Mexico’s military remains the last and sometimes only option."