Skip to main content
Support
Show
Streaming
Vaccinating the Americas –Lessons from Varicella Vaccination
Explore More
Close
Article
Security and Defense
Be Bold. Free the Leopards.
By Robin S. Quinville on January 24, 2023
Share on FacebookShare on TwitterShare via Email
Share
Share
Email
Part of the Security and the Rule of Law
Publication

Mexico's Role in the Deadly Rise of Fentanyl 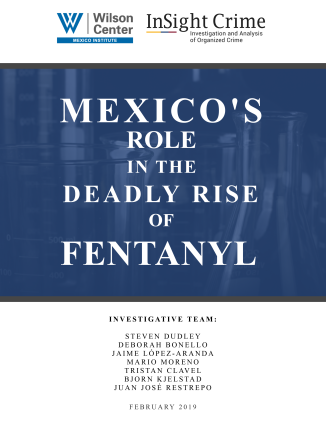 Since surging into the market in 2013, fentanyl has become the most lethal category of opioid in the United States. The Centers for Disease Control and Prevention (CDC) estimated that more than 47,000 people died from an opioid overdose in 2017 in the United States—28,000 of those deaths were due to synthetic opioids, which the CDC says is largely the result of the uptick in abuse of fentanyl.

This investigation sought to better situate Mexico’s role in the fentanyl trade. Chinese companies produce the vast majority of fentanyl, fentanyl analogues, and fentanyl precursors, but Mexico is becoming a major transit and production point for the drug and its analogues as well, and Mexican traffickers appear to be playing a role in its distribution in the United States.

To investigate Mexico’s role, we found we had to look at the entire distribution chain. InSight Crime employed two researchers in Mexico, two in the United States, and two in Colombia who combed all the databases, scoured through judicial documents, filed freedom of information requests, and executed dozens of interviews in Mexico and the United States with law enforcement, prosecutors, health specialists, and others. The result is a nuanced picture but one with troubling implications for the future of drug trafficking and drug consumption.

While seemingly dominated by two large criminal groups in Mexico, the fentanyl trade requires vast networks of smaller subcontractors who specialize in importing, producing, and transporting synthetic drugs. Both large and small organizations appear to be taking advantage of the surge in popularity of the drug, which is increasingly laced into other substances such as cocaine, methamphetamine, and marijuana—very often without the end-user knowing it. To be sure, rising seizures of counterfeit oxycodone pills laced with fentanyl illustrate that the market is maturing in other ways as well.

Fentanyl’s potency also opens the door to entrepreneurs who bypass Mexico altogether, obtaining their supplies directly from China and selling them on the dark web. There is little public understanding of the prevalence of this part of the trade and even less of its medium- and long-term implications. The low barrier of entry into this market and its high returns make for a frightening future in which synthetic drugs of all types could proliferate.