Skip to main content
Support
Explore More
Close
Blog post
Governance
In a Confrontation Between Putin and the West, Belarus May Get Caught in the Middle
By Igor Zevelev on August 5, 2020
Share on FacebookShare on TwitterShare via Email
Share
Part of the Recent Publications
Publication

More than Neighbors: New Developments in the Institutional Strengthening of Mexico’s Armed Forces in the Context of U.S.-Mexican Military Cooperation 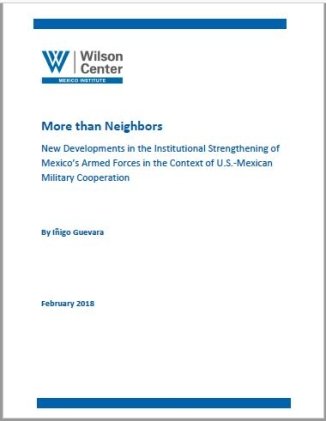 With strong commercial and economic ties cemented by the North American Free Trade Agreement (NAFTA) and fostered by strong bilateral political will, the U.S. and Mexican defense establishments have been drawn closer together in the past 10 years than ever before. This is a very young relationship which has matured extremely fast, mainly due to its strong institutional foundations.  Gaining a deep understanding of cultural—including historic—Mexican sensitivities helped bring this relationship to an extremely resilient place, a place where the binational leadership has been able to withstand the current political statements emanating from the White House, which began with the sharp anti-Mexican rhetoric of the 2016 Trump Presidential campaign.  The limits of that resilience, however, remain to be tested as the current administration of President Peña Nieto has exercised strategic patience in its response to the rhetoric.  A less disciplined and more populist or nationalist Mexican response would likely have led to a deterioration of that relationship.  The 2018 Mexican Presidential elections will be strong on emotions, and all political parties will be expected to take a strong position on Mexico’s relationship with the United States.

The bilateral defense relationship has a chance to survive and continue to grow if it remains handled by career professionals that have a serious understanding of its importance. Greater collaboration between Mexico and the United States is emerging as part of a greater Mexican participation in regional security.

The Mexican military mindset has long focused on domestic operations, with little concern on the global stage; however this has begun to change, in the same manner in which Mexico is aspiring to be a more active player in the international arena and to transform into an emerging power.  This paper highlight a number of rationales for Mexico to adopt a more strategic international focus and strengthen military cooperation with the United States in particular.