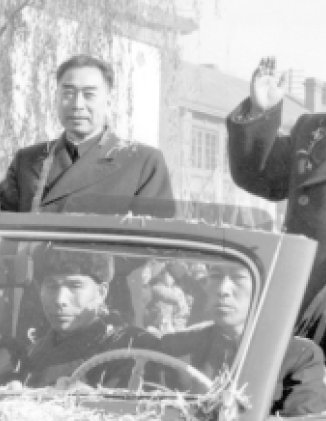 After decades of suffering from warlordism, civil war, and outside invasion, China’s economy was in shambles by the time of the founding of the People’s Republic in October 1949. To support the economic construction of the PRC, technical experts from the socialist bloc, including the Soviet Union and Eastern Europe, were dispatched to China, while these same countries also began to receive Chinese trainees and interns. However, in “promoting the unity and prosperity of the socialist camp, in developing friendly relations between our country and nationalist countries, and in undermining the aggressive and expansionist activities of the imperialist camp led by the United States,” China itself did not hesitate to also walk down the path of offering foreign economic and technical assistance to Asian socialist countries. China sent its engineers to North Korea, North Vietnam, and Mongolia, and created training programs and work opportunities within China for apprentices and interns from these countries, all at the same time that specialists from the Soviet Union were on the ground in the PRC.

The training of North Korean apprentices in the industrial and mining sectors began in earnest after 1953 and was nominally intended to support North Korea's post-war reconstrution. Shanghai, as the main base for training interns from Asian socialist countries, received more than 1,500 North Korean interns between 1953 and 1959, accounting for more than 70-percent of the North Korean trainees dispatched during this period.[1] This e-Dossier introduces this history by way of a set of newly obtained and translated documents from the Shanghai Municipal Archives (SMA) as well as the Hebei Provincial Archives (HPA). These documents, and others available at the HPA and the SMA, reveal the successes and failures of the training program for the North Koreans. More importantly, while concerned more or less exclusively with North Korea, the documents bear on much larger issues and are useful for studying the nature of economic relations and exchanges between China and the socialist bloc during the Cold War.[2]

From a legal perspective, the signing of the “the Sino-North Korean Treaty of Friendship, Cooperation, and Mutual Assistance” in July 1961 marked the official establishment of the Sino-North Korean alliance. But as most individuals would acknowledge, the alliance between the two sides actually began in October 1950, when China dispatched troops to North Korea.[3] It was also during this year that the first batch of North Korean interns arrived in China.[4] In a sense, China’s experience in receiving foreign trainees began with North Korea, and the lessons learned and the best practices developed at this time were important for later chapters in the history of China’s foreign economic exchanges.

The principle underlying China’s economic and technical assistance to socialist countries was to support the economic development of its fraternal allies, with the end goal of strengthening the socialist camp and curbing the aggression and expansion of the so-called imperialist camp. The Chinese government saw the training of North Korean technicians and students as a concrete example of “aiding Korea and resisting America” which would strengthen the “traditional and unbreakable friendship and solidarity” between the peoples of the two countries. Moreover, it was viewed as a valuable and important contribution to North Korea's post-war reconstruction, which began in 1953. As revealed in the available Chinese archival documents, the Central Committee of the Chinese Communist Party as well as party organizations and government offices at all administrative levels saw the training of North Koreans as a “serious and glorious political task.” The work units which received the trainees were told that they must “do a good job [and] do not do poorly.” Thus, what was really a technical or economic matter was transformed into a political activity of the utmost importance.

Because the training of North Koreans was such a significant political task, it was never meant to harm the bilateral relationship between the PRC and the Democratic People’s Republic of Korea (DPRK). But frictions were sometimes unavoidable. Although China and North Korea signed a series of agreements to lay the groundwork and rules for bilateral training programs, the DPRK did not always adhere to them when sending trainees to China. Occasionally the trainees had health or education problems which were expressly forbidden in the agreements; in other instances, the Koreans asked to change the content and location of training programs, even after the trainees had arrived in China. This in turn impaired the ability of China to effectively train the North Korean students and technicians.

Mistakes were not exclusive to the North Koreans. For instance, the political significance of training North Koreans was not always understood or appreciated at the grassroots level of China, and the training programs therefore did not always translate into a closer relationship between the Chinese and Korean peoples. This was especially clear in Shanghai, where many problems arose. Some Chinese workers recalled how Korean troops of the Japanese army had committed war crimes in Eastern China and were therefore unwilling to train the North Koreans.[5] Others refused to provide the level of care for the North Koreans mandated by the official agreements. Many other problems arose between Chinese and Koreans which hindered the success of the training programs and created real political problems between the two countries.

At the other end of the spectrum, some Chinese workers approached the training of Koreans all too delicately. Some technicians at mines, for example, feared that any criticism of the Korean trainees whatsoever would negatively affect Sino-North Korean relations and was therefore politically and personally risky. As a result, some interns did not learn work-place protocols or follow the instructions of their trainers close enough.[6] This circumscribed any long-term benefit to the training programs, while creating many short term difficulties within the factories and mines.

Because the Central Committee had emphasized the importance of training North Koreans, the Shanghai CCP Committee was especially worried about these types of problems. For this reason, in the mid-1950s, the Municipal Party Committee ordered all factory and mine workers to receive additional internationalist education. Because of the increase in ideological education and a general improvement in how Chinese workers handled their North Korean trainees, by 1955 the relationship between Chinese and Koreans had changed for the better.[7] It could be said, then, that the uptick in Sino-DPRK relations was the result of both government intervention and the work of individuals on the ground.

The political environment in China and East Asia mattered dearly to the training program. In the first half of the 1960s, North Korea did not participate in the Soviet led anti-China chorus, and even as the Sino-Soviet ideological debate began, Sino-DPRK relations remained warm. In this context, the training of North Koreans in China was able to continue. However, after 1965, relations between North Korea and the Soviet Union became closer, while China and North Korea became more distant from one another, even to the point of ceasing mutual exchanges.[8] The training programs for North Koreans were inevitably affected by this fallout. On May 10, 1967, China’s State Foreign and Economic Trade Committee announced that “the [North] Korean side has been delaying the arrival of its trainees in China for a long time, making many difficulties and losses for us in our preparatory work.” For this reason, the State Council had agreed to suspend all training programs for North Korea at this time.[9]

LIANG Zhi is an associate professor of history at the Center for Cold War International History Studies, East China Normal University in Shanghai. He is the author of Lengzhan yu “minzu guojia jiangou”—Hanguo zhengzhi jingji fazhan zhong de Meiguo yinsu, 1945-1987 (The Cold War and “Nation Building”: America’s Role in the Process of the Political and Economic Development of the ROK) (2011). A specialist in the history of U.S.-South Korean relations and in the history of social sciences in America, he has also published more than a  dozen articles in leading historical journals in China.

Document No. 2
“Additional Notification from the Organizational Bureau of the Central Committee on the Issue of Political Examinations for Persons Receiving Training Abroad and Technical Personnel Aiding Korea,” 21 April 1954
[Source: Hebei Provincial Archives 857-4-89, 10-11. Obtained by Shen Zhihua and translated by Jeffrey Wang.]

Document No. 7
“Notice from the First Machine Building Ministry Concerning Suspension of the Preparatory Work for Receiving North Korean Trainees,” 31 May 1967
[Source: Shanghai Municipal Archives B112-5-13, 24. Obtained by Liang Zhi and translated by Neil Silver.]