Former House Parliamentarian Charles Johnson recently told a U.S. Capitol Historical Society audience that “gridlock is the regular order.” In all fairness, he might have added that gridlock is interrupted periodically by erratic bursts of legislative activity guided by irregular procedures.

Taken together, this stop-and-go form of lawmaking using convoluted procedures has elevated irregular order to the new normal in Congress. This is especially so, as Johnson observed in his talk, when the two chambers are divided between the parties.

Political scientist Barbara Sinclair takes a more ecumenical view of the situation: Instead of characterizing Congress as dysfunctional and gridlocked, she attributes these perceived failings to our democracy working as it should.

In a Boston University Law Review article, Sinclair argues that the “much maligned partisan polarization” stemming from “the strengthening and internal homogenization of the political parties ... has made possible the development of a strong and more activist party leadership that allows the majority to work its will.”

Obviously, when the two chambers are split between the parties, the battle of conflicting majority wills sometimes produces gridlock.

But, on balance, Sinclair sees the partisan sorting that has taken place in Congress as being beneficial to the institution because it has produced a system that is more open, inclusive, accountable and expeditious (at least in the House, to the majority party caucus).

She concedes, however, that this change has entailed costs — namely the loss of a committee system once characterized by expertise, deliberation, bipartisan harmony and productivity. That was consciously replaced by Democrats in the 1970s because the bipartisanship that existed on committees did not always reflect the majority will of the Democratic Caucus.

This new partisanship did not start with Speaker Newt Gingrich (R-Ga.), as some have recently argued. He only pushed the accelerator.

In his Capitol Historical Society talk, Johnson quoted from his portion of the new preface to “Parliament and Congress,” co-authored with Sir William McKay, in which he laments the “retreat further away from the collegiality, spontaneity, openness and compromise that characterized earlier Congresses” and the fact that “little ‘institutional memory’ remained among Members to enable recall of those practices and norms.” Johnson went on to charge that the “increased partisanship and stalemate, motivated by the ‘win-every-vote’ mentality of House majorities,” and implemented through a variety of internal and external forces, have all contributed to the current condition of the House.

The irony is that both parties, when in the minority, promise a return to the (old) regular order if they capture majority control. However, upon regaining majority status, they soon forget their promises and ratchet up the irregular practices of their predecessors. We have seen this occur three times in the House: 1995, 2007 and 2011.

The three prerequisites Johnson notes as essential to restoring some measure of regular order are a participatory and deliberative committee system that aims to develop good policy, a more open amendment process on the House floor and a return to conference committees to resolve differences. He says all of these could technically be done tomorrow by the leadership through the Rules Committee.

What stands in the way, of course, is what Sinclair points to: the will of the majority party to have its way. And that way is all about getting re-elected and retaining majority status. The majority does not trust the minority to behave as rational, responsible actors if allowed to fully participate.

Both parties, while in the minority, have amply demonstrated their willingness to use political subterfuge through amendments to put majority Members in politically embarrassing positions — what Sinclair calls the difference between the “popular” and the “responsible” approach.

The puzzling thing to many observers is how Congress, which is suffering the lowest public approval ratings in the history of polling, can continue with partisan gamesmanship that seems to sacrifice the public interest for party gain.

Party leaders, backed by their anxious caucus members, have apparently concluded that irregular order is the best way to retain power and that people don’t care about the procedural shortcuts being used.

In 1913, when House Republicans complained about the procedural abuses of the Democrats’ “King Caucus,” Speaker Champ Clark (D-Mo.) responded: “The people of the United States ... are much more interested in results than in the methods by which those results are obtained.”

Perhaps this fall’s elections will help determine whether the people think they are even getting the results they want or whether we will continue to flail along in the new regular order of gridlock.

Don Wolfensberger is a senior scholar at the Woodrow Wilson Center, resident scholar at the Bipartisan Policy Center and former staff director of the House Rules Committee. 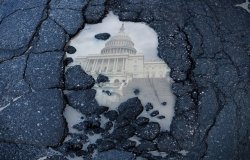