Saudi Anxiety Grows Over Vision 2030 for the Kingdom 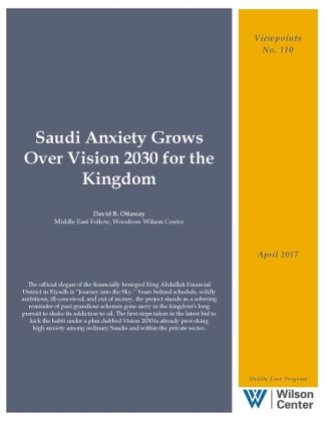 Riyadh—The official slogan of the financially besieged King Abdullah Financial District here is “Journey Into the Sky.” Years behind schedule, wildly ambitious, ill-conceived, and out of money, the project stands as a sobering reminder of past grandiose schemes gone awry in the kingdom's long pursuit to shake its addiction to oil.

The latest “journey” is known as Vision 2030, another wildly ambitious plan aimed at radically restructuring the kingdom’s statist economy so the government no longer has to depend on oil export earnings for 85 percent of its revenue and can shift the burden for economic growth onto the private sector. It is in direct response to the crash in oil prices over the past several years and the realization that the “black gold” that transformed this desert kingdom into the Arab world’s economic powerhouse is fast fading in value.

The vision is very much the brainchild of the 31-year-old deputy crown prince, Mohammed bin Salman, whose own political fortunes may well ride on whether it proves a success or failure. Son of King Salman, “MbS” as he is known here, has accumulated more power faster than any prince in the contemporary history of the ruling House of Saud. He is also defense minister and head of the Council of Economic and Development Affairs, which now controls the kingdom's purse strings and is responsible for implementation of the plan.

“The main question for 2030 is: Does it depend on one person only, or is there a state behind it?” remarked Abdullah al-Shammri, a former Saudi diplomat and policy analyst who noted that Crown Prince Mohammed bin Nayef , who is also interior minister, has no personal stake in the venture.

Made public with much fanfare a year ago this month, Vision 2030's multitude of goals includes sweeping social reforms, and it initially aroused enormous public enthusiasm. This was true particularly among Saudi Arabia's restless youth delighted by its promotion of entertainment in the face of strong opposition from the kingdom's ultra conservative Wahhabi clerics.

But an economic downturn plus controversial first steps taken to implement the vision have noticeably dampened this enthusiasm. Consumer spending has crashed and the overall economy ground almost to a standstill, with the IMF lowering its estimate for growth this year from 2 percent to 0.4 percent. The government faces a $85 billion deficit in its current budget even after putting $266 billion in projects on hold. Still, the kingdom is hardly about to go bankrupt. It holds over $500 billion in foreign reserves and had no problem raising $26.5 billion on the international bond market to help cover the deficit.

But there is now a mood of high anxiety both within the business community and among ordinary Saudis as it sinks in that the golden era of unlimited state largesse is over. For more than four decades, the kingdom's vast oil wealth showered generous birth-to-death benefits on all its citizens and hundreds of billions of dollars in government contracts on private companies that came to be dominated by a handful of royally connected crony capitalists.

Emblematic of the kingdom's changing fortunes was the government's decision last year to increase the cost in stages for water, electricity, and gasoline; eliminate generous allowances for all civil servants; cut ministers’ salaries by 20 percent; and impose all kinds of new taxes on consumer goods and a five percent value added tax starting next year. The elimination of allowances alone reduced incomes for most civil servants by more than 20 percent and for some more than 50 percent. The public sector provides jobs for two-thirds of the Saudi workforce.

“So far, Vision 2030 has been all taking away from Saudis and no giving back from the government,” remarked one disgruntled Saudi academic.

That may be changing. Well aware of mounting public discontent, the government on April 24 announced it was restoring the allowances for all civil servants and soldiers. It has also launched a new scheme for cash handouts to help offset the higher cost for water, electricity, and gasoline. Over half of the kingdom’s 20 million nationals have registered for “citizens’ accounts.” These will be used to disperse cash in various amounts pegged to family income. The overall cost of the program to the cash-strapped government has yet to be determined.

Success of Vision 2030 rides to a great extent on an initial private offering (IPO) to sell off five percent of the Saudi Arabian Oil Company (Aramco), the world’s largest state energy firm boasting reserves of 260 billion barrels and a production capacity of 12.5 million barrels a day. (Right now, Aramco has cut back production to about 10 million barrels in a bid to increase oil prices.) The IPO proceeds would go into the government’s Public Investment Fund whose worldwide investments would generate tens of billions of dollars in non-oil income. The government still has to convince foreign investors Aramco is worth $2 trillion so that the IPO will produce $100 billion, the largest in history. The Saudi evaluation of Aramco, however, has been seriously questioned by the highly respected British energy consultancy, Wood Mackenzie, which believes it may only be worth $400 billion. The plan to launch the IPO early next year has its skeptics among Saudis and foreigners alike.

There are other reasons for skepticism about Vision 2030. Saudi Arabia has long harbored big dreams for kicking its addiction to oil. The Saudi landscape is strewn with the remains of white elephants after going through nine five-year plans since 1970. The late King Abdullah laid plans in 2003 to convince private investors to build six entirely new economic cities devoted primarily to non-oil industries. That number was reduced to four due to lack of interest compounded by the 2008 worldwide recession. Fourteen years later, only one, the King Abdullah Economic City 60 miles north of Jeddah on the Red Sea, is up and expanding, though still only at 15 percent of capacity.

Another harebrained scheme to diversify the economy saw the government in the 1980s handing out huge subsidies to encourage Saudis to go into wheat farming in the desert only to discover, predictably, that the venture was draining irreplaceable water reserves. Only in the energy sector have mega projects worked out, especially in the petrochemical industry and refineries.

It is not just ordinary Saudis who are suffering post-oil trauma. The shock for the kingdom’s crony capitalists has been even more dramatic. Two of its longtime favorites, the Bin Laden Group and Saudi Oger, have laid off tens of thousands of workers, partly due to huge arrears in government payments. The former had been awarded 65 percent of all the contracts for the King Abdullah Financial District on a sole source basis.

A principal goal of Vision 2030 is to shift the motor of growth from the state to the private sector, which now accounts for less than 40 percent of the kingdom’s GDP. The government wants to see the latter’s share increased to 60 percent. Right now, however, the non-oil sector is hardly growing. Last year it expanded by just 0.4 percent, and this year it may be only one percent, according to Fahad Alturki, chief economist for Jadwa Investment. He said the private sector had been in “panic mode” most of last year until the government in October began paying out $21 billion in its arrears to cash-starved contractors. Alturki remained “cautiously optimistic” that the private sector was headed for better days, noting plenty on liquidity among Saudi banks to finance new projects.

The government is trying to entice Saudi and foreign investors alike to invest in everything from hajj-related tourism and rare minerals mining to wind and solar energy and even military arms manufacturing. However, the first Vision 2030 mega project just announced is a sprawling $8 billion entertainment city in the desert southwest of Riyadh with America’s Six Flags theme park as the main attraction. The government also this month opened bidding on various multi-billion-dollar solar and wind projects.

What to do about costly mega projects from the past like the King Abdullah Financial District still haunts the government—and Vision 2030. Located on the northern outskirts of Riyadh, the district comprises 60 buildings, the tallest 73 floors high. All are linked either by enclosed, air-conditioned walkways or a monorail. It was supposed to be built by private capital, but when that failed to materialize, the government siphoned off $8.3billion from the Saudi Public Pension Agency Fund. The Vision 2030 roadmap noted candidly that the project had been undertaken “without consideration of its economic feasibility” and had resulted in a “large oversupply of commercial space for the years to come.” (In fact, it nearly equals all the commercial space to be found in the rest of Riyadh.)

Still, the dream lives on to make the Riyadh financial district the world’s fourth largest, with the Saudi stock exchange, central bank, and the Public Investment Fund its anchors. Officials give varying estimates of when even a “soft opening” might take place, this summer or a year later. Meanwhile, they are working on rules and regulations to make the district more accessible to foreign businessmen. The idea is to declare it a “free zone” with direct access by a train (yet to be built) from Riyadh’s international airport and with no visa required. Right now, the first tenant has prematurely taken up residence in the midst of a gigantic construction site—the British accounting firm PricewaterhouseCoopers. Its task: an assessment of how many more billions will be needed to finally make the district a going concern.